He thought it was going to happen in the winter of 2011 after I got knocked up.

We tore down paneling, had drywall and carpet put in, and added moldings.

We successfully made it less scary – and then moved onto the kid’s nursery.

And the man cave became a dumping ground.

It was a waste of space.

And I hate wasted spaces.

That’s one reason I don’t like vaulted ceilings because I think they waste too much space, but that’s another blog post, now isn’t it?

Finally, Grunt Labor is getting his man cave.

One makeover at a time.

We started with the Vintage Radio turned Bar Cabinet, and now we just finished the Built-Ins Makeover. 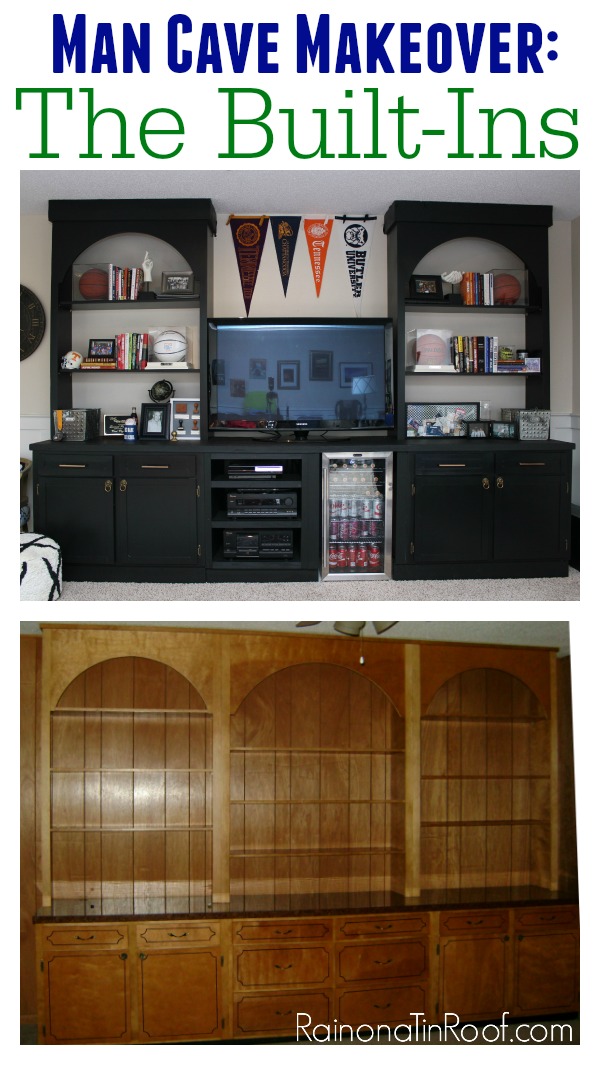 Disclosure: This post was a collaboration with Build.com, however all opinions and lack of completing the man cave makeover in a timely manner, are 100% mine.

When we first bought the beloved foreclosure, this room (in our basement) was covered in paneling and had stepped right out of 1975 – or somewhere thereabouts. The built-in unit was there, but it was on the other side of the room, which I guess technically means its not a built-in, but whatever. Here’s what it looked like then: 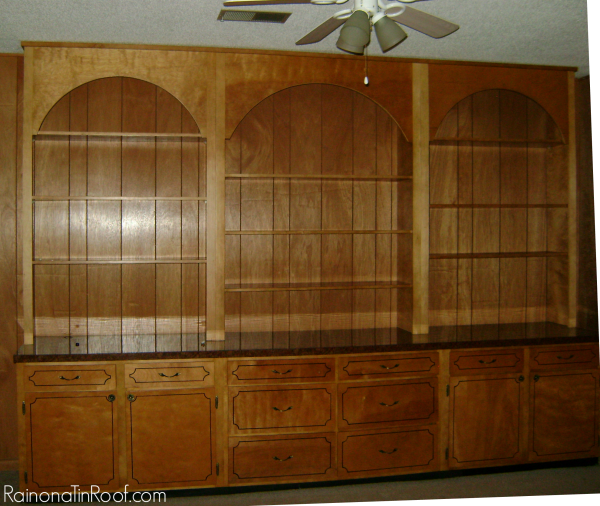 The way the built-in was placed wasn’t ideal for us. As soon as you walked down the stairs, it was right there in your face. When I got knocked up and we realized that we’d better put this reno into overdrive and tore down the paneling and everything else, we moved the built-in to the other side. Grunt Labor took out the middle drawers and made them shelves. I threw some white paint on it and the countertop and called it a day.

I was growing a human inside me. I had no energy for anything else. 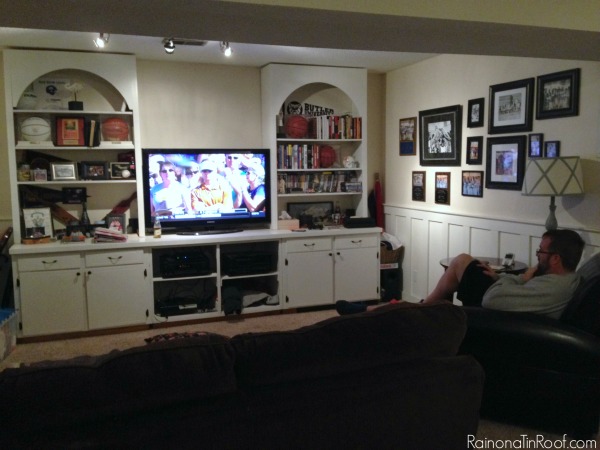 We started to use it more, but it wasn’t how Grunt wanted it.

And lord knows, he deserves something of his own around here.

As fate would have it, Build.com contacted me a couple months back and asked if I wanted to work together on a project. I told Grunt Labor about it and he immediately started scouring their site…plotting out his man cave.

The end result was this: 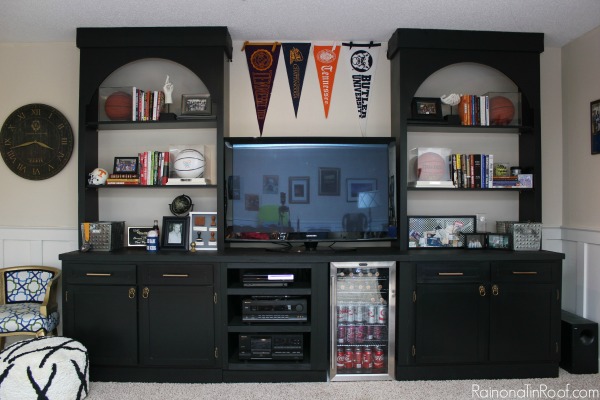 This space is now officially his. Well, except for the kid’s toys on the other side of the room. 🙂

Grunt has been dying for a refrigerator down here for months – the vintage radio turned bar cabinet I made him just wasn’t enough for him apparently. 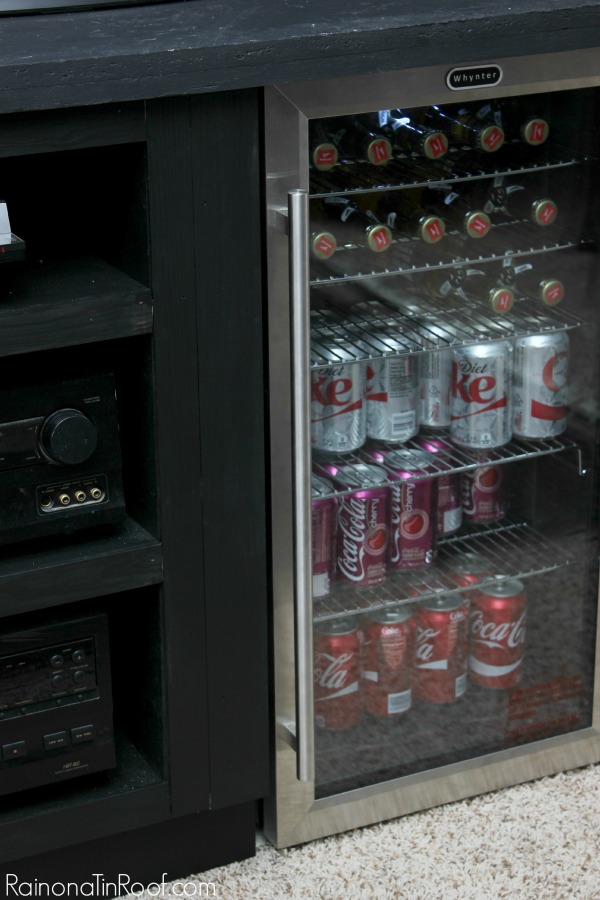 He found this refrigerator on Build and left the rest to me. The refrigerator was actually taller than the cabinets we had, so we had to raise them – it was much easier than I thought and I’ll be showing you just how easy it was in another post.

The refrigerator holds a ton of drinks and keeps them super duper cold. 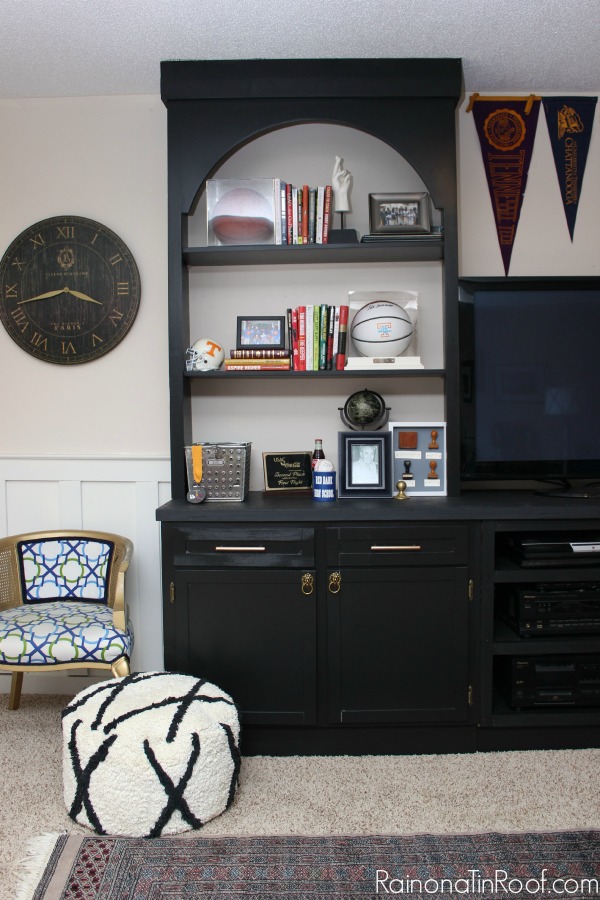 Obviously, we painted the entire unit as well. Before painting the cabinets and drawers, we added moldings around the edges to cover up the old design and give it a bit more of a modern look.

The countertop got a makeover as well. 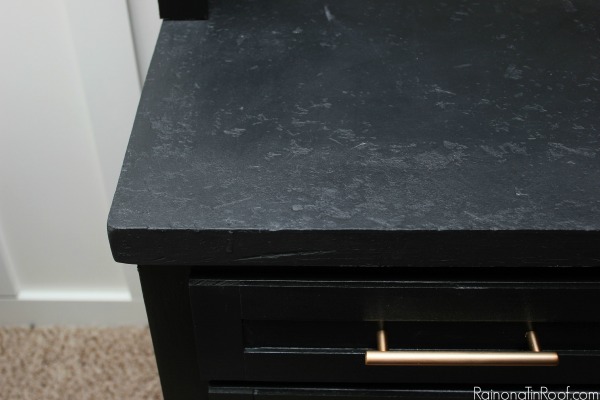 It’s now sporting a faux stone look – you will die when you see how freakin’ easy it was to create this look. Not. Even. Kidding. 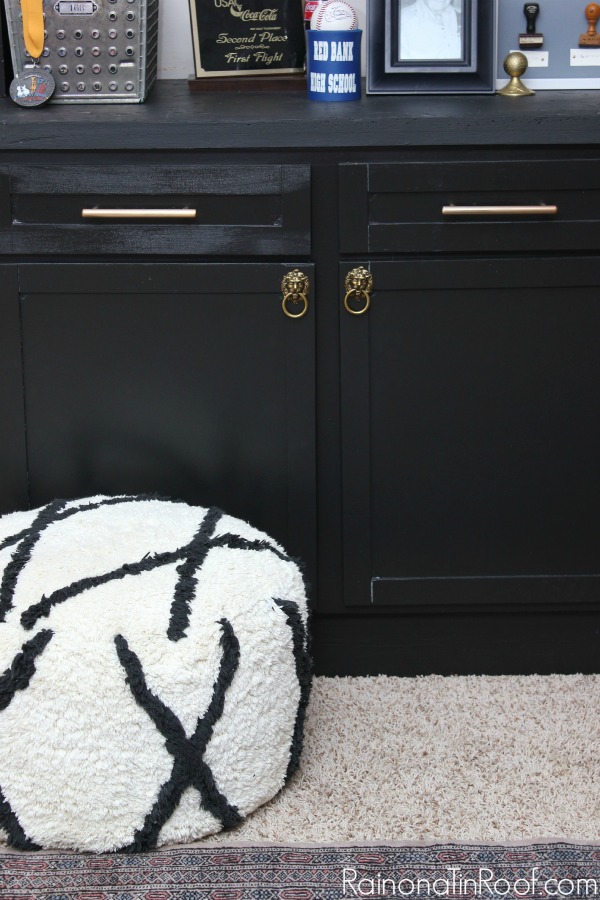 The school’s mascot where Grunt teaches at is a lion, so they were only fitting.

We had one issue with one of the drawer pulls – a screw broke off inside the handle and we couldn’t get it out. I contacted Build and they had me a new one delivered in just a few days. They have great customer service and even great customer resources including how-to videos, PDF instructions and more. 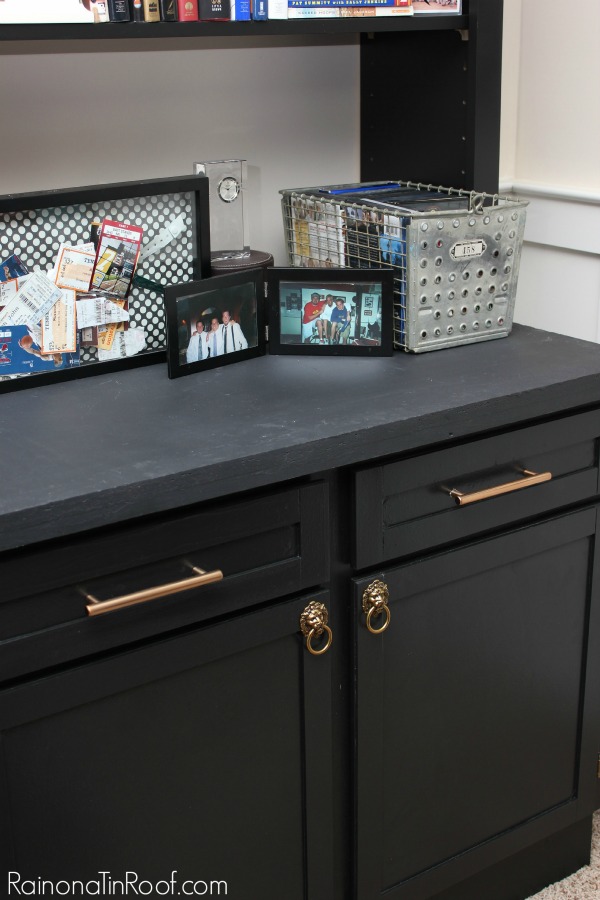 I did a lot of rearranging and editing on the shelves as well. Those vintage locker baskets are hiding DVDs.

I made a little vignette as a tribute to Grunt Labor’s grandpa as well. I think it may be my favorite part of the whole makeover. 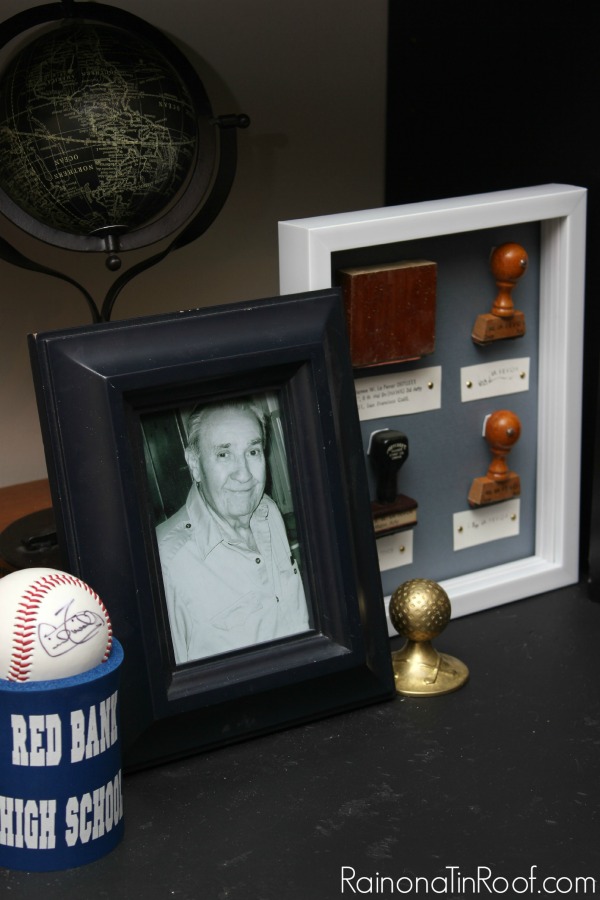 The stamps were his grandfather’s and we found them in one of his old tool boxes that Grunt got. We’ve had them for a couple years now and I knew I wanted to do something special with them, but it took me a while to figure out what. I finally mounted them all in a shadow box along with a stamped paper of each one. I put the little brass golf ball there because that is one of Grunt Labor’s memories of his grandpa – him swinging golf clubs in the backyard.

Just a few more things to do and this man cave will be complete…he’s forcing me to paint a Tennessee Vols checkerboard table. I’m a Bama fan. If you’re from the south and know football, you know what this means. Send more cheap beer.

Looking for more “manly” home decor ideas? See these then…