You are here: Home >> Decorating >> Masculine Bedroom and Office Makeover 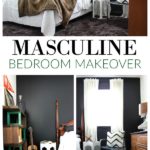 How many uses can you find for one average sized bedroom?

Well around here, we can find three.

I thought that as kids got older, they liked to spend more time with their friends – away from the adults in their lives.

Apparently, I was wrong.

Or either Bill is the exception.

It seems the older he gets, the more he’s here.

I’m not complaining – I’ll take all the quality time I can get; he’s off to college next year.

In the meantime though, the room he was inhabiting was not very “Bill.” 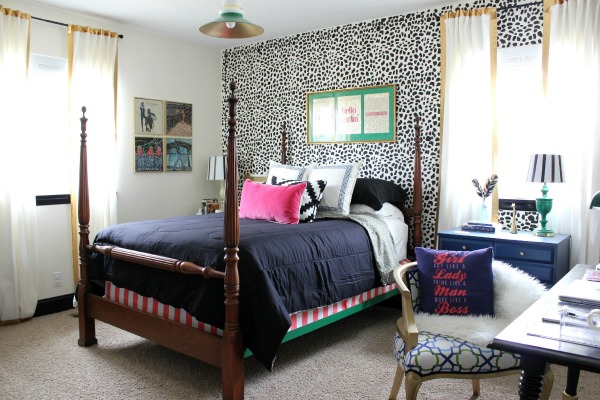 While Elvis loved his jungle room, apparently Bill was not fond of a similar theme with the leopard print wall in his room. 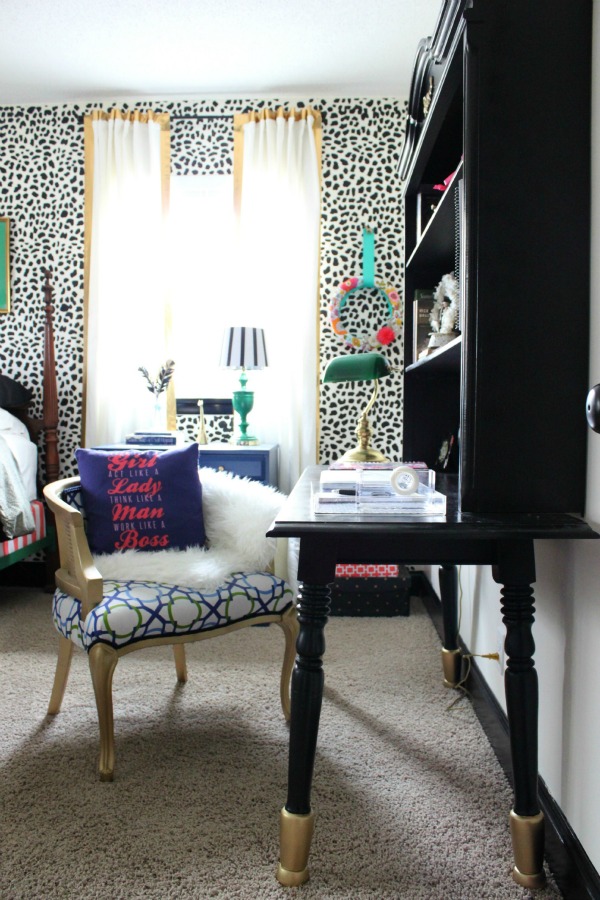 I was also invading part of his space with my office area.

So I told him he could decide what he wanted to do with the room.

I know – I couldn’t believe I uttered those words myself.

The only conditions were that it did still have to have the bed, as the room is also our only guest room, and my desk had to stay in the space. Anything else was up to him.

I set him up on Pinterest one night – and held my breath.

I prayed he wouldn’t pin some hideous basketball/baseball/football/soccer ball border circa 1992. I cringed as he looked at bright orange Tennessee Vols decor. I finally had to leave the room.

About 30 minutes into his browsing, he called me back in and presented me with his pick – a masculine black and white room with fur accents and wood tones.

I don’t know if I was ever more proud of him.

I asked him if he was sure he liked that. He did. He was actually excited about it. And then he said the words I would have never dreamed he would say – “I think we should add in some pops of green too. That would keep it in line with the rest of the house.“

This is what we ended up with… 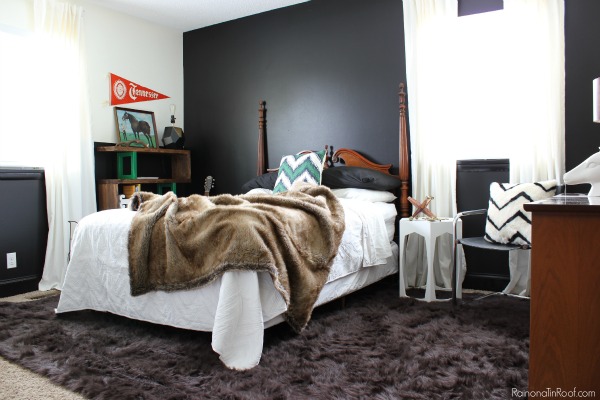 I really don’t know who was more excited about how well it turned out – me or him. It is perfect for him, it works just fine for guests and my office space is still in the room – just out of the way.

*A big thanks to Home Decorators Collection for helping with this project so Bill can have a bedroom that doesn’t resemble the jungle room.

We definitely wanted black in the room, but didn’t want the entire room to be black. We opted to paint one wall completely black and then paint black halfway up on two of the walls. 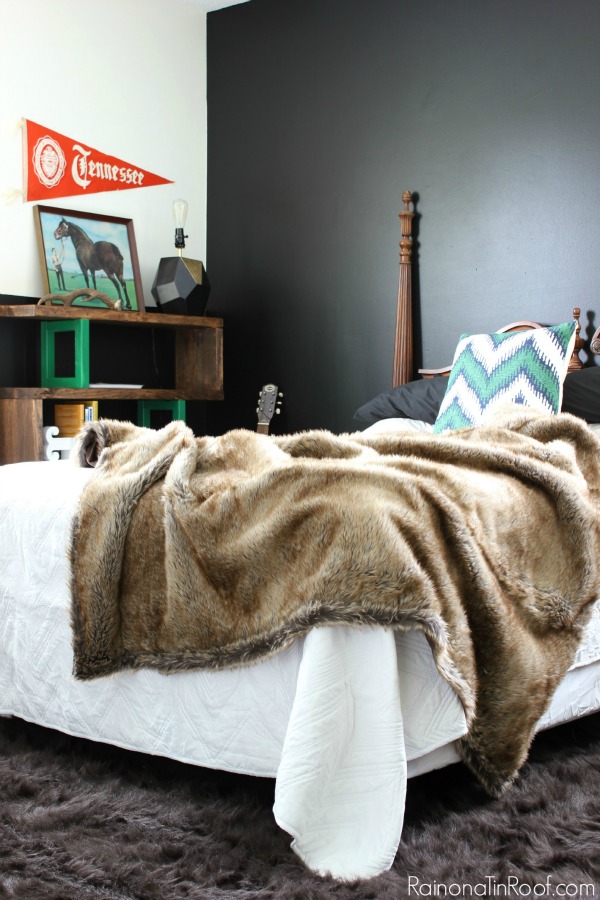 The bed stayed, however I removed the rails and added feet to the box spring – it was ridiculously easy. It really helped to open up the room. I also think it makes the headboard really stand out against the black walls – I love that wood grain against the black wall. We opted for a white quilt on the bed, accented with a super soft and cozy faux fur throw and a green accent pillow. 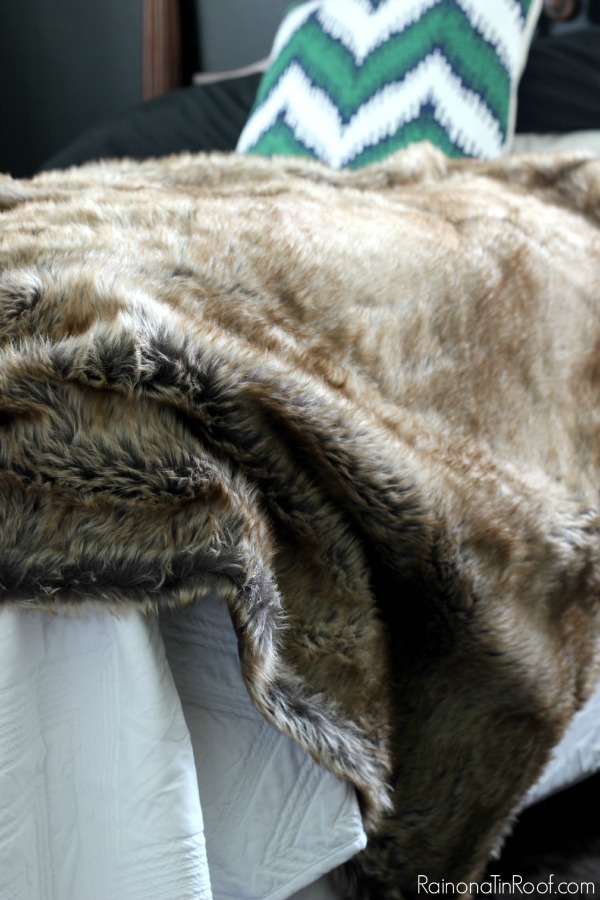 Most of the time, he totally ditches the quilt and sleeps with the fur throw. He. Loves. it.

My desk used to be on the wall coming right into the room – it was way too overwhelming there though. We moved it to another wall and found a vintage mid-century modern dresser to place along the wall for some much needed storage. 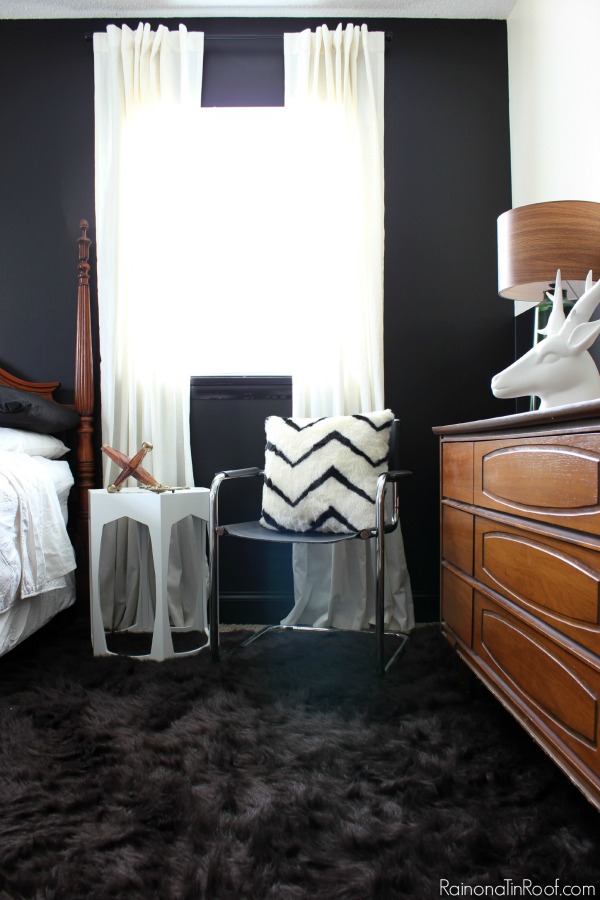 A chocolate faux fur rug from Home Decorators Collection covers most of the carpet in the room. The rug was a steal of a deal. I got an 8 x 11 for under $300. When Bill came home and saw it for the first time, he immediately laid down on it and hardly moved for the rest of the night. We did keep the chrome and black chair in there, but got smaller side tables for each side of the bed. 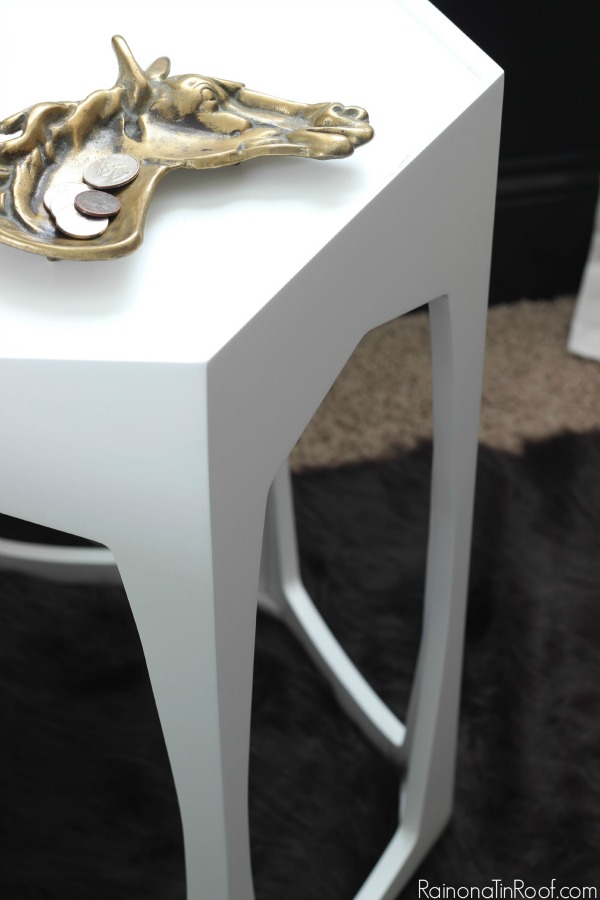 The tables have open geometric shapes on the sides, so they are very airy feeling, which is great for small spaces. There is still plenty of room though to hold knick-knacks on the top.

He picked out the dresser himself (we found it at a local vintage shop). I pulled the mirror that actually goes with mine and Grunt Labor’s bedroom set out of storage to prop on his dresser. 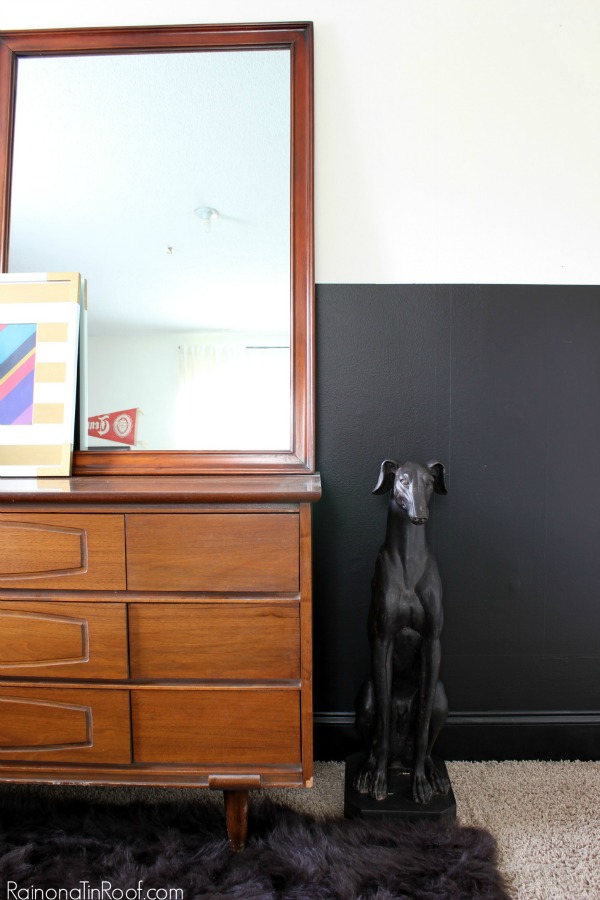 He fell in love with Finneman the dog as soon as he saw him. 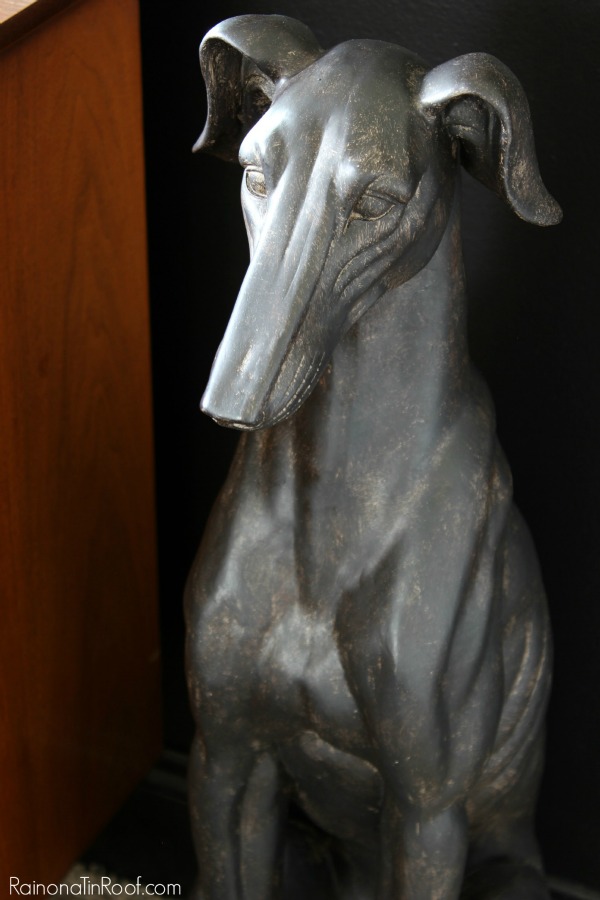 He didn’t really have to convince me – I thought putting the dog in a bedroom rather than as the typical entry decor was a genius idea. However, if you follow me on Instagram, you may have seen that the Circus has tried to make the dog her own. She’s drug him all around the house and adorned him in hair of tinsel, a ballerina costume and most recently a combination of items that make him look like he’s a cross between an Egyptian pharaoh and a Disney princess.

The art and deer head on the dresser was in the room before, it still worked pretty well with the space, however we did add in a green glass lamp that I wouldn’t mind stealing for my own room. 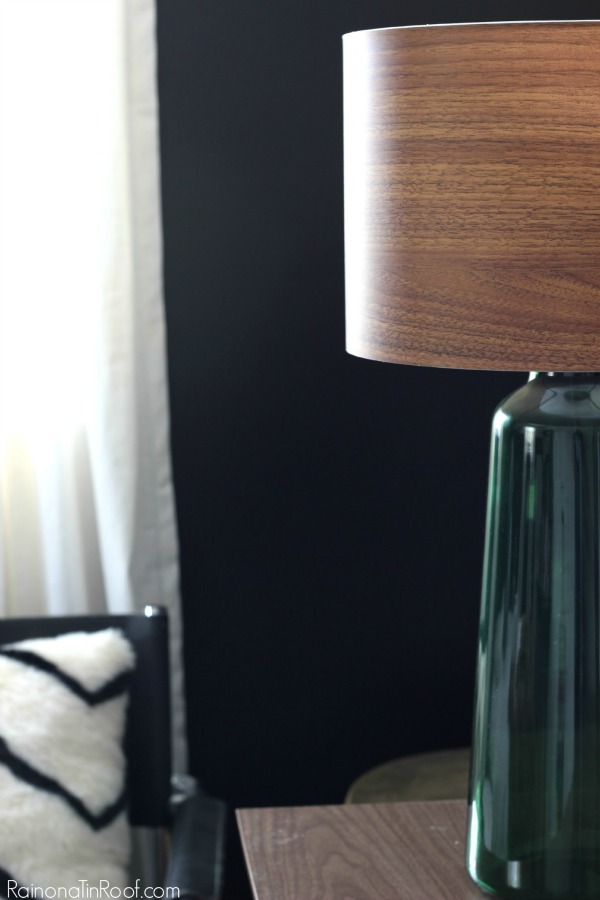 When he said we needed green accents, there was no way I wasn’t going along with that one. 😉 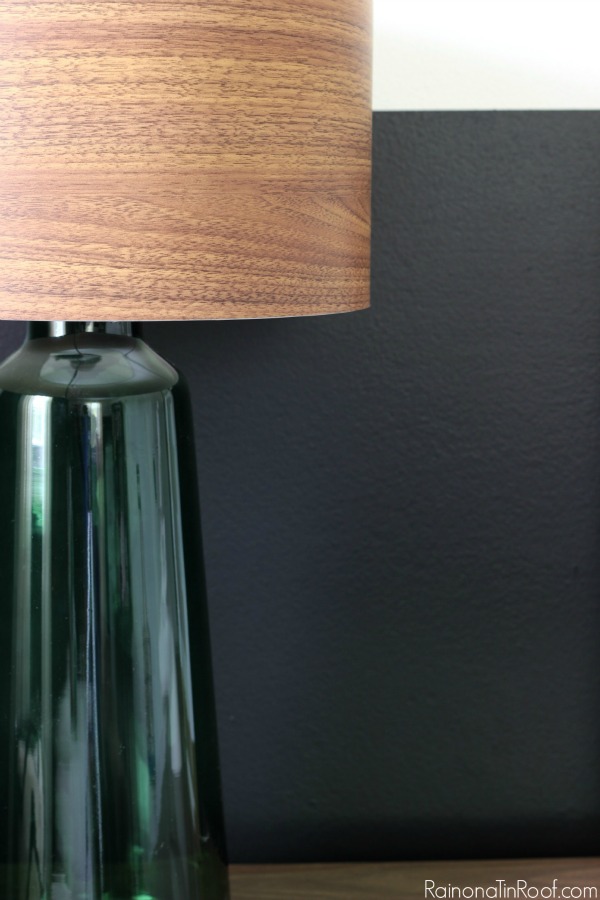 I also love the shade on this lamp – it’s a woodgrain look that goes great against the black and white wall.

The other side of the bed may be my favorite part of the room though. 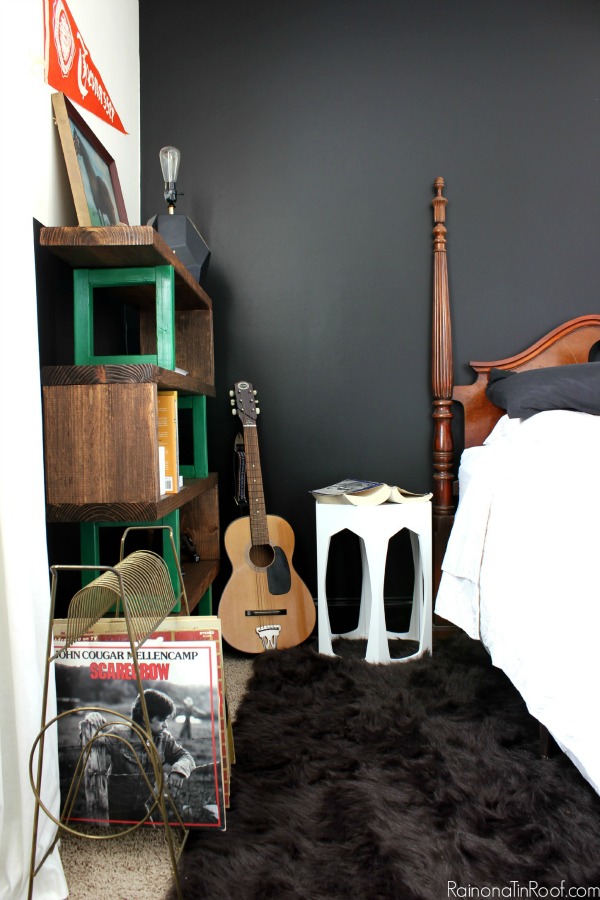 Bill and I made, (yes we made!) a bookshelf for this wall. 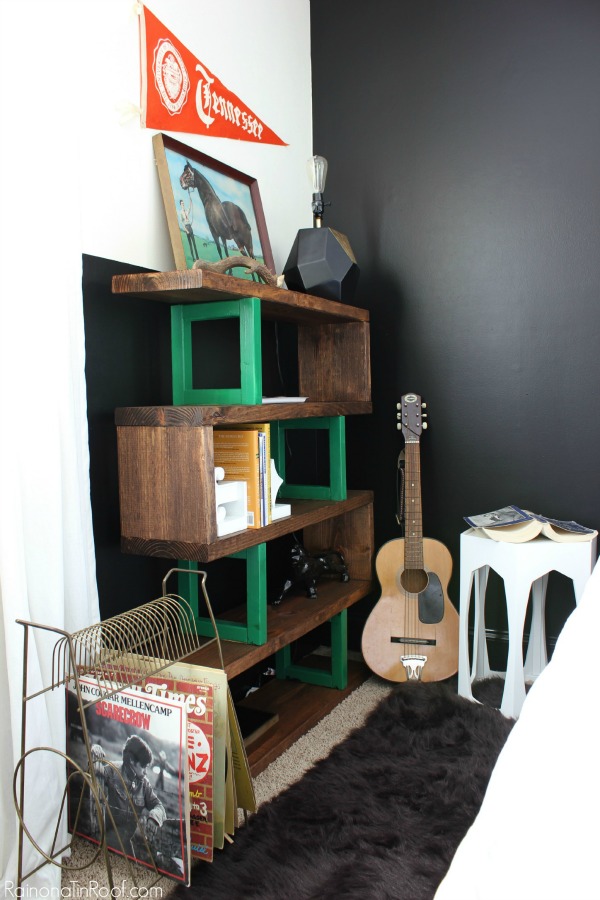 The full tutorial for the bookshelf is here. We decorated with some vintage items around it – including my grandmother’s guitar which he thought was a pretty cool touch. 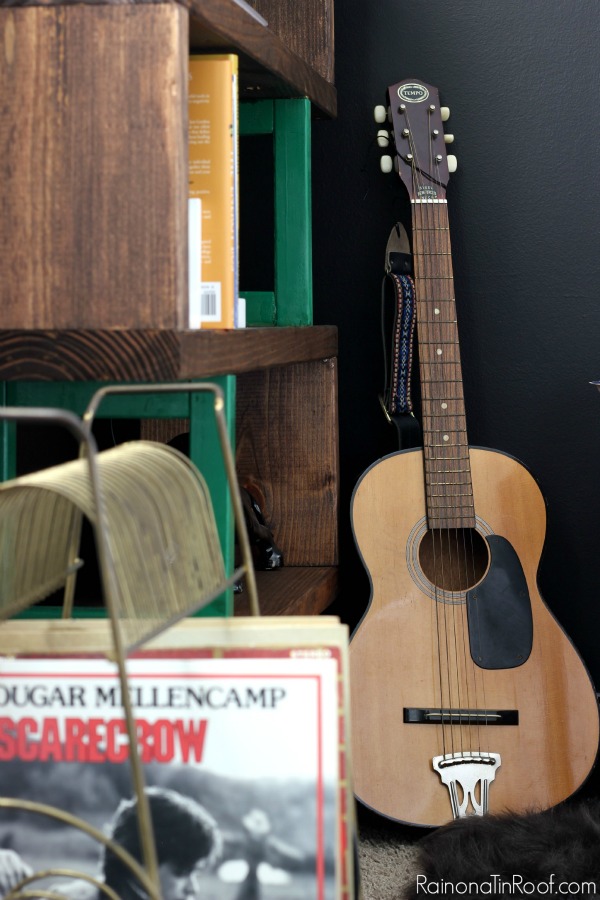 The other occasional table is on this side as well. 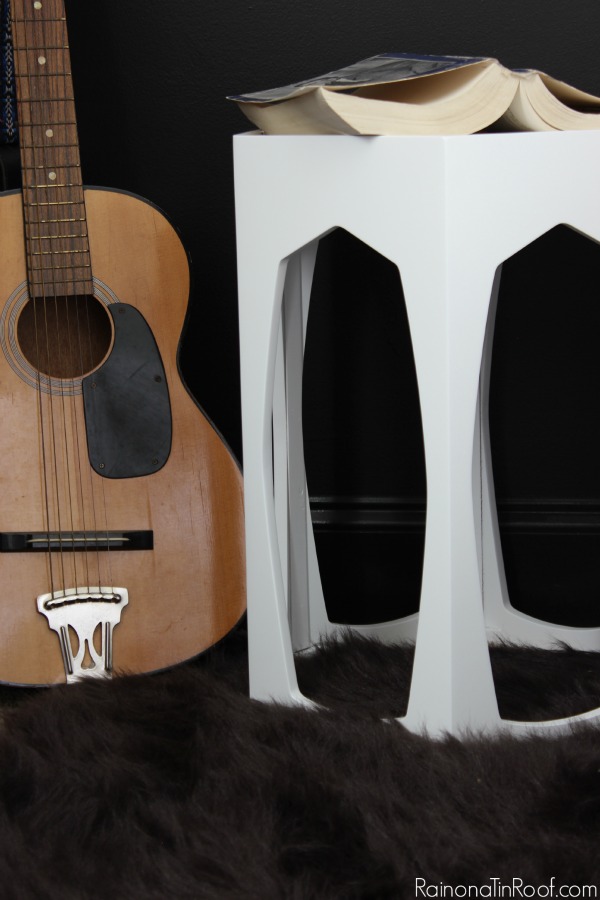 And finally, on the wall opposite from everything else is my workspace. 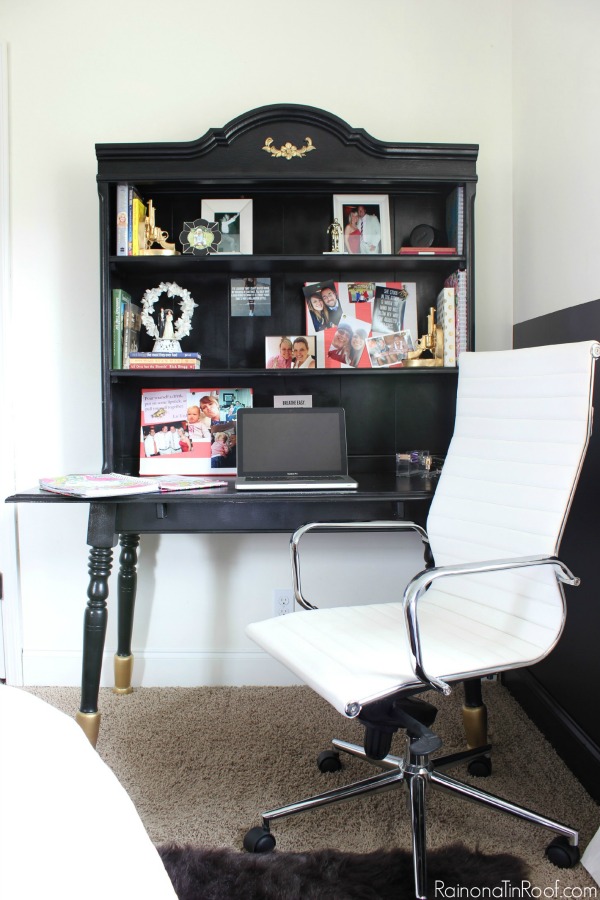 It’s tucked away from everything else and I also kept this wall entirely white to visually separate the two spaces. I’m one smart cookie, right?

No, I’m not at all. It was just a random idea that happened to work. 🙂

So what do you think of the masculine bedroom makeover? Bill did a pretty good job, didn’t he? He only had a smidgen of help… 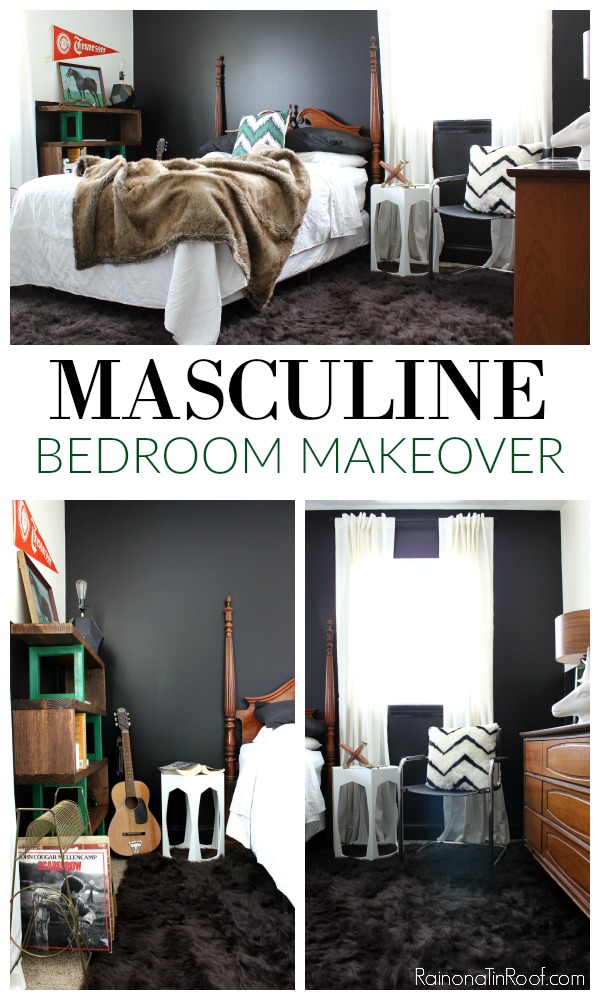 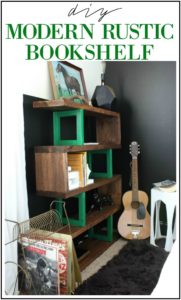 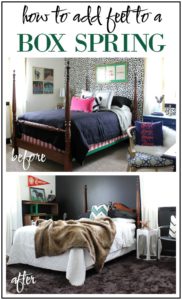 How to Add Feet to a Box Spring

And…Home Decorators Collection is giving away a $50 gift card to one lucky guy or gal! 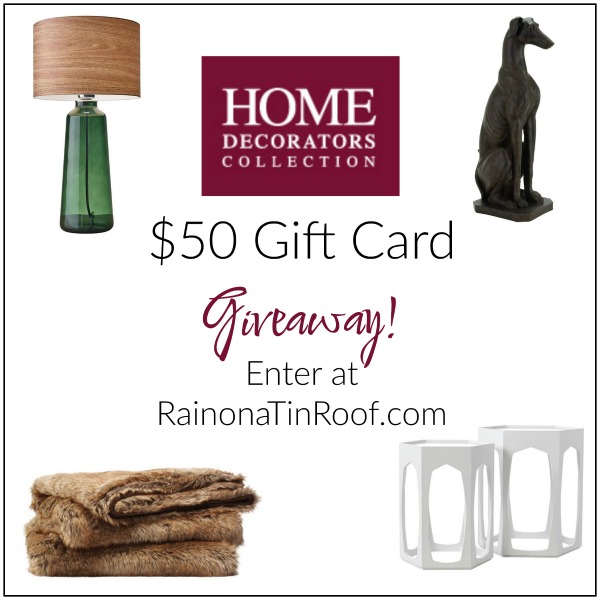 Use the Rafflecopter below to enter!

Disclosure: This post was a collaboration with Home Decorators Collection. However, all opinions and pride in the teenager’s design skills are 100% mine.