You are here: Home >> Home Tour >> In an unexpected twist…we bought a house. Meet the 70’s Landing Pad.

You read that right. And no, its not April Fools Day or anywhere close to it.

We bought a house.

And it was completely unexpected.

If you’ve been around here for more than a minute, you know our love for our current home, The Beloved Foreclosure runs deep. We never really expected to leave it. We even put in a pool and new patio this summer, had plans to completely re-do the Circus’ room and were even considering adding on an addition – we love our house.

Now, let’s switch gears for a minute. We’ve known for the past couple of years that my in-laws wanted to move down to Chattanooga after my father-in-law retired to be closer to the Circus – well closer to us too, but let’s face it, mostly they wanted to be closer to the Circus. When we found this out, we looked at lots to build a house on that would be big enough for both our families and we also looked at existing homes that would hold us all as well. I am one of the few who loves her in-laws and would happily have them in the same house as us. We actually found one, but couldn’t work a deal out with the sellers. Finally, we all decided that our best shot would be to find them a house in our neighborhood – we love our neighborhood and if we couldn’t find a great house for all of us, then we wanted to stay in the neighborhood. The problem with that is that there are few smaller, one story homes in our neighborhood that would work for them. We found one that we thought would work, but they couldn’t even get an offer in before the house was already under contract – good houses tend to move fast in our neighborhood. We also kept our eyes open for a house for us and if we found one, then my in-laws would take our house.

We never really thought the latter would happen. We always expected to find a house for them – not us.

A house came up for sale just up the street from us that was good for us. We looked at it, made an offer, and had a contract on it.

And then one thing led to another, and things were progressing way too slowly and to us, it just seemed like a sign that this wasn’t the house for us. So, we backed out of the contract.

And when we backed out of the contract, another house went up for sale in our neighborhood. And it was actually better for us and our needs than the other one. We took that as another sign. We had it under contract within a little over a week and just closed on it last Friday.

We are calling our new home The 70’s Landing Pad.

It is definitely rocking the 70’s vibe and it is our landing pad – we have no intentions of leaving, y’all.

Here’s the tour of the new pad. Let’s all go ahead and put on our rose colored glasses for this one- that’s the only way I’m coping with all the work that has to be done. 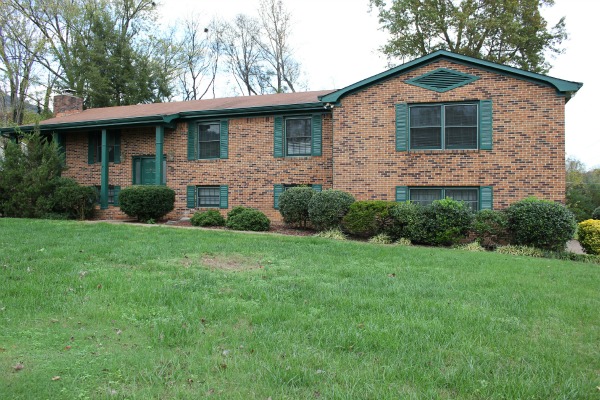 Welcome to the 70’s Landing Pad.

As you can probably tell from the photo – it is a split foyer. I will say that I haven’t always been a big fan of split foyers, but I don’t detest this one. 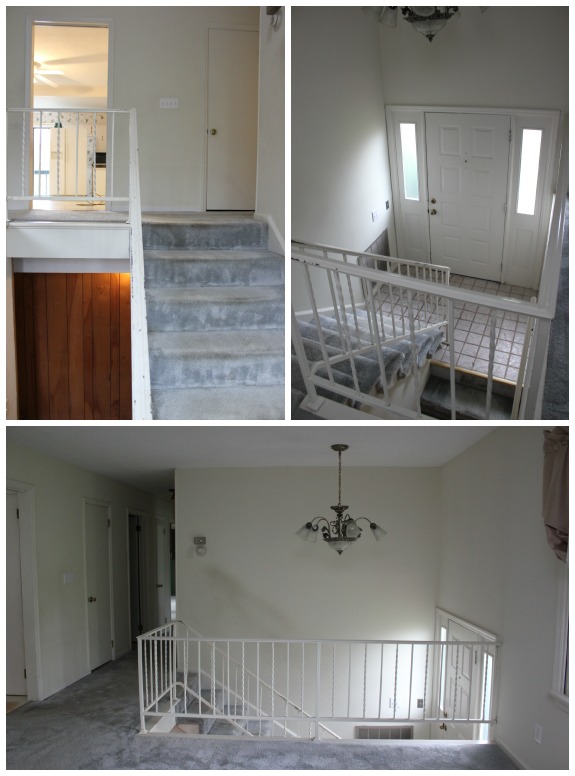 We will be updating the railings as well as all light fixtures, flooring and paint throughout the house. 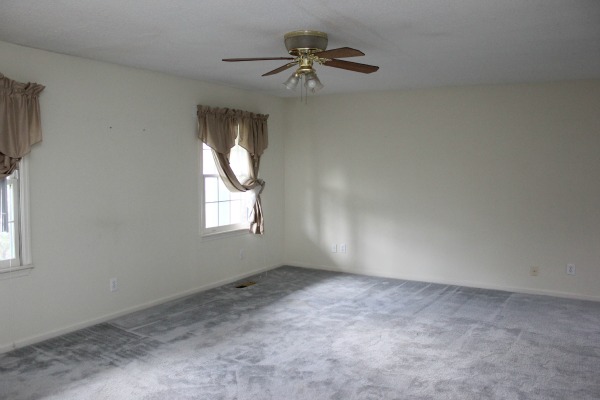 The living room is just off the entryway. Totally diggin’ that blue carpet. #nope 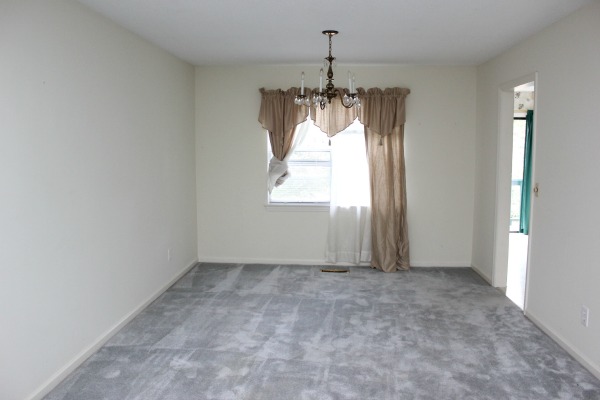 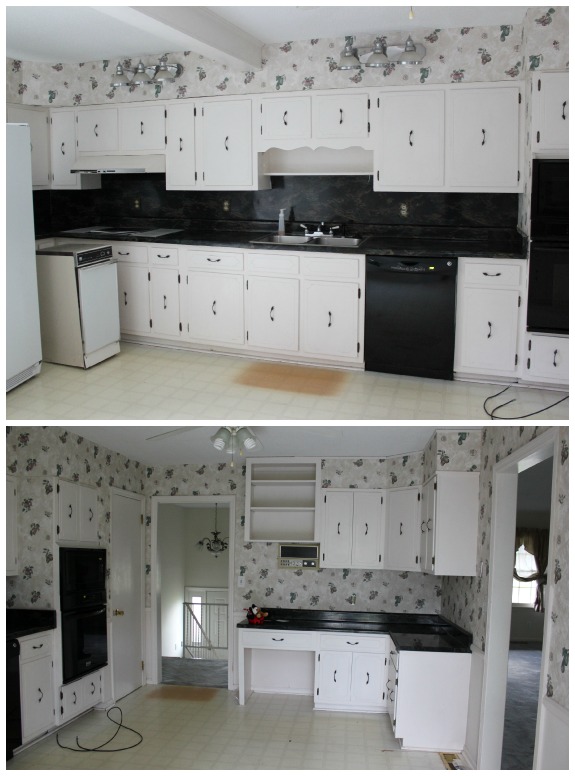 And then there’s the kitchen. And all the wallpaper I have to remove. And cabinets I have to paint. And hardware I have to replace.

And why in the world are there vanity lights over the cabinets??? 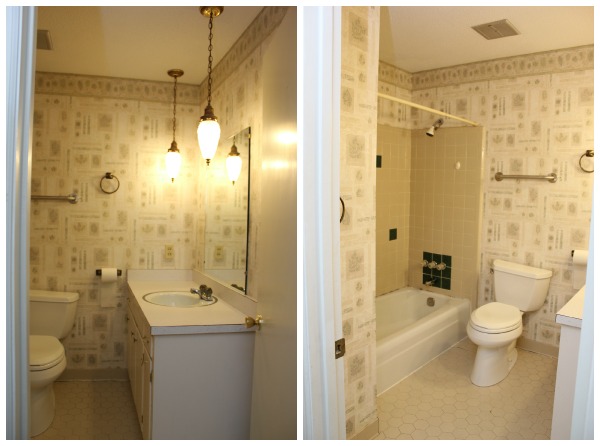 Sorry – I don’t know why I’m using hashtags so frequently in this post. I think its just one of my favorite ways to be a smartass. 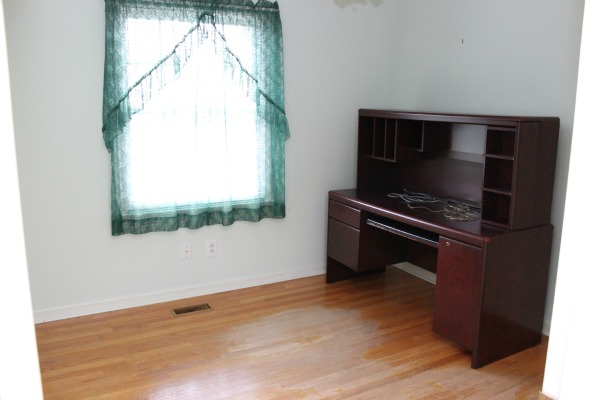 Technically, this is a bedroom – but it is tiny for a bedroom. So, it’s going to become my office, which Bill is very happy about because I will no longer be invading his space at all.

Also, I do realize we did just makeover Will’s entire room and my office space. When we started that, we had no idea we were going to be moving. If I would have known, trust me, I would have waited to do all that at the new house. The good news though is that everything we did to his room here will work perfectly at the new house too. So essentially, he’ll have the same room there as he did here, with the exception that my office won’t be in there. 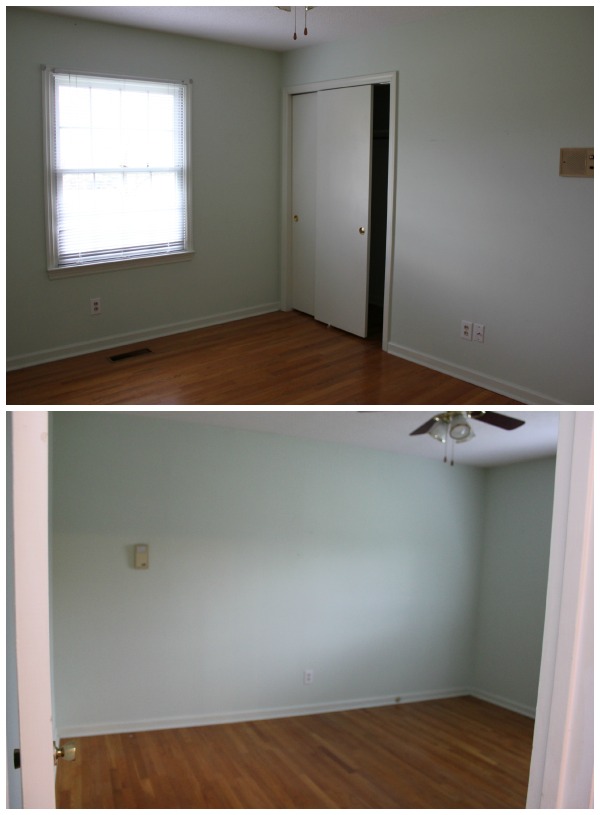 The Circus’ Bedroom is about the same size as it is here. However, we are going to be making it a little bigger – I’ll show you how in a minute.

Also, there is hardwood in two rooms in the entire house – only TWO! Why, why, why couldn’t the builders have just kept that stuff going throughout??? What was the point of just putting it in two of the bedrooms? 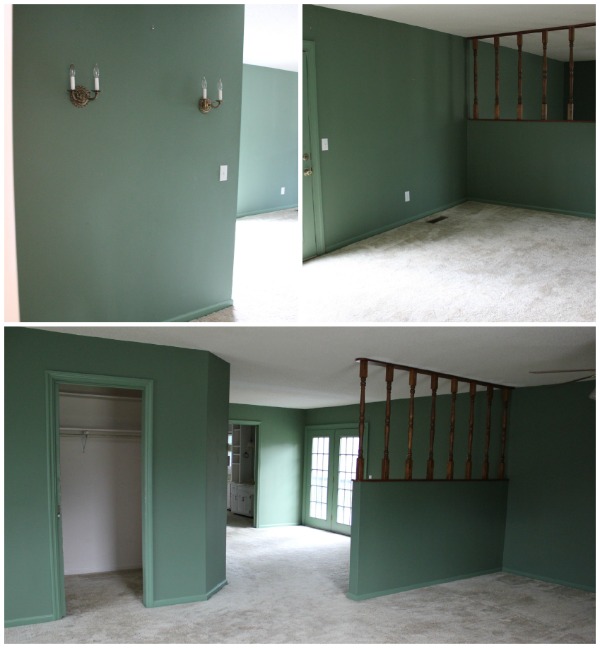 And then there’s the master bedroom.

That I have no idea what I’m going to do with. It has more space than we could ever need. There’s a sitting area, which will be nice, but honestly I could make another sitting area elsewhere in the room. Since this room is right beside the Circus’ room, we are actually going to take some of the space from it and give it to the Circus. We just really don’t need this much. 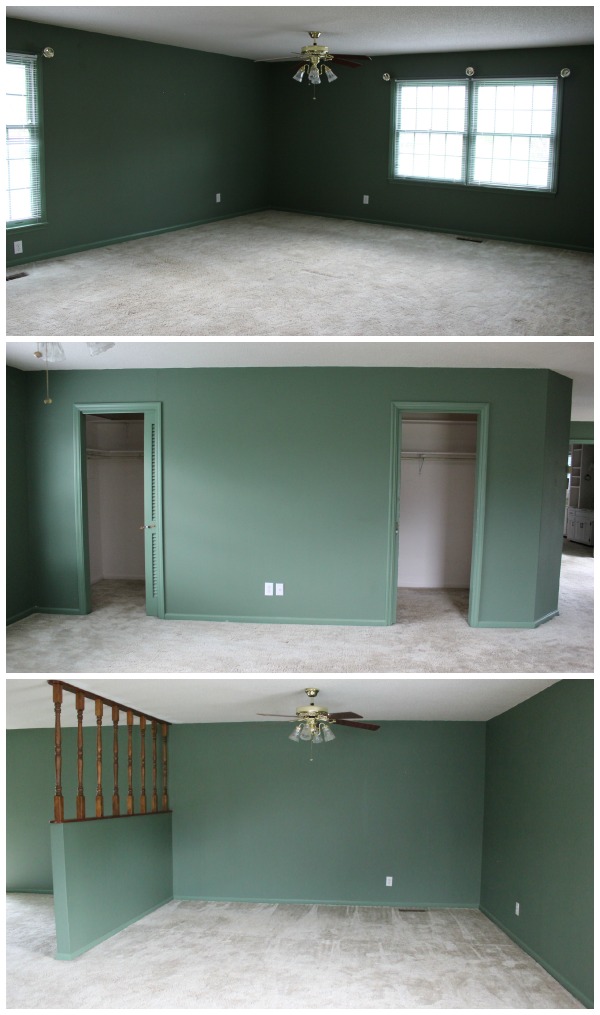 It’s nice to have so much space, but honestly, it’s one of those things where the additional space could have been used (and been more functional) elsewhere. 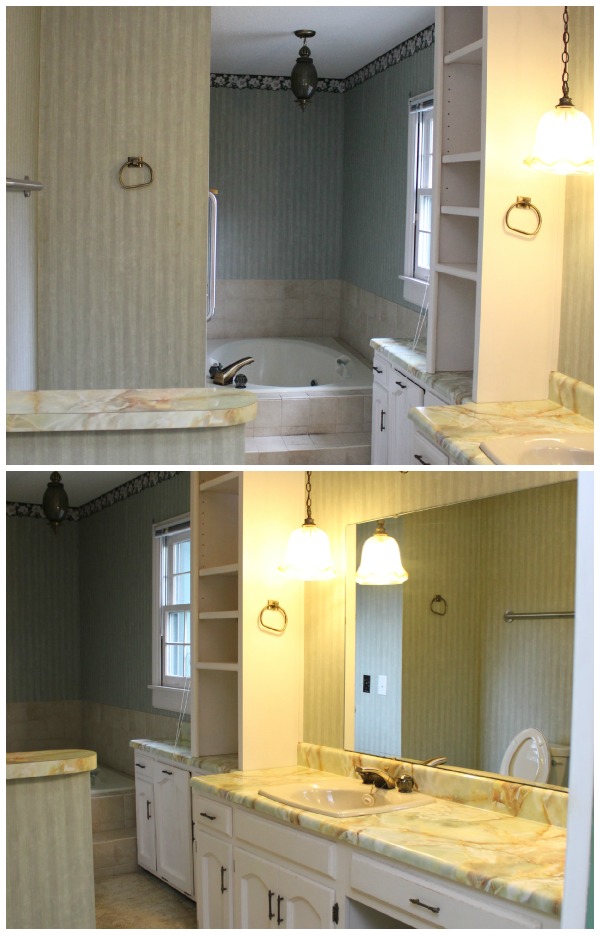 I’m also referring to this little gem as the tunnel. Because that’s what it is – one long tunnel. And it doesn’t make much sense. There is no shower in this bathroom – only a tub. #WTH This also goes back to my thoughts on how all that space in the master could have been more functionally used.

I have no clue what to do in this space. #shelaughsinsanely

Let’s move downstairs, shall we? 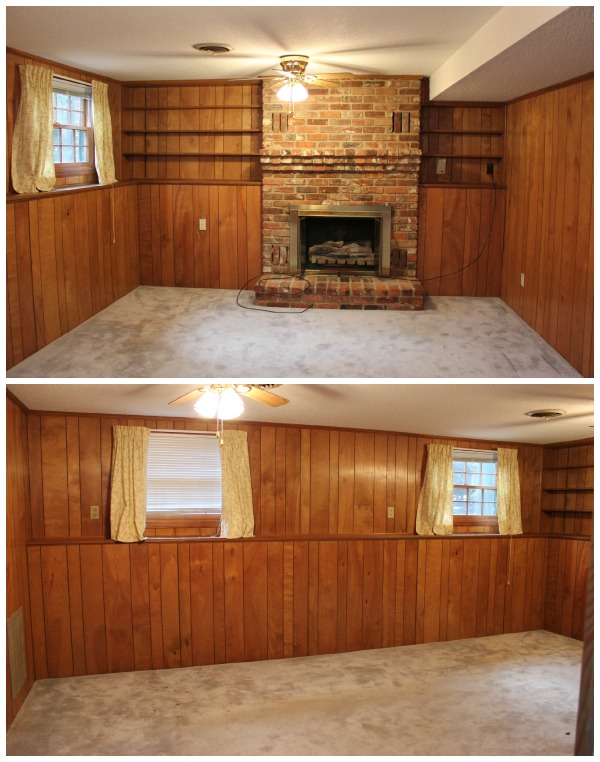 This area will function as both the family room and man cave. As of right now, we aren’t going to put a TV in the living room, so this is where I’ll get my weekly dose of Shonda Rhimes. Once drywall is up, some painting and new carpet is down, I think it will be cozy. 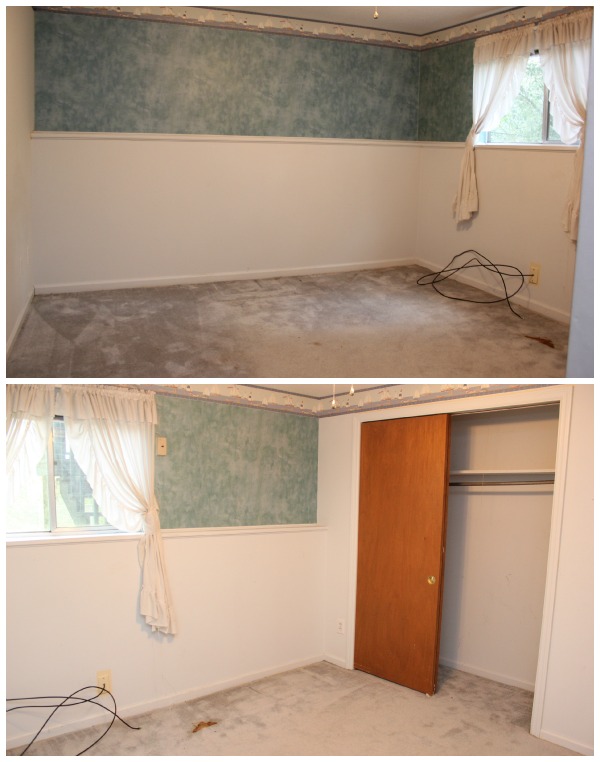 This bedroom, which will function as Grunt Labor’s office, is just off the den. I’m not quite sure how he got the larger office area since he doesn’t even work from home, but whatevs.

I’m kidding. I had to say that so that when he reads this he’ll say something about me throwing him under the bus, which I do sometimes do on rare occasion just because I feel its my God given right to mess with him. #amiwrong #nope

Really though, he gets the bigger office because he will eventually be getting his dad’s furniture from his office and all of it wouldn’t fit in the smaller office upstairs. 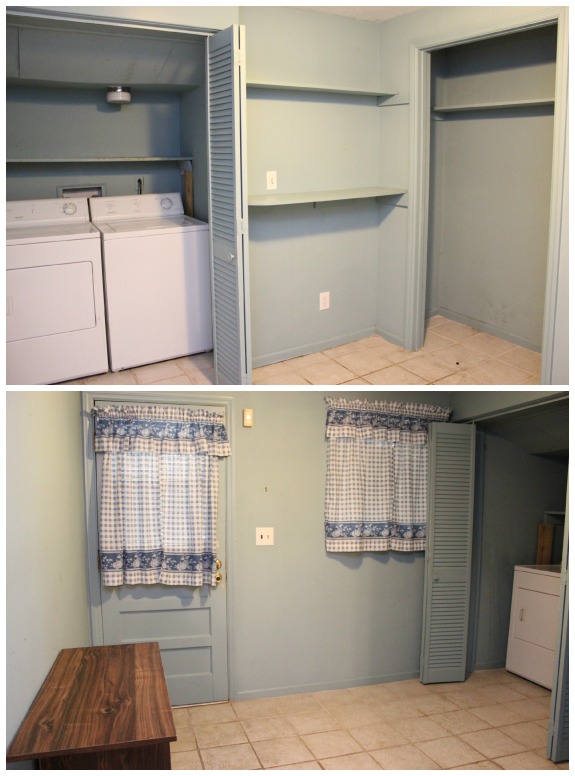 Grunt Labor is also very excited to have his own laundry room. You do know that he does our laundry, right? He calls it his “woman’s work.” He doesn’t mean it to be an anti-feminist remark. I’d give him a swift kick in the rear if he did. And also, he can call it whatever the hell he wants to as long as I don’t have to do the laundry. 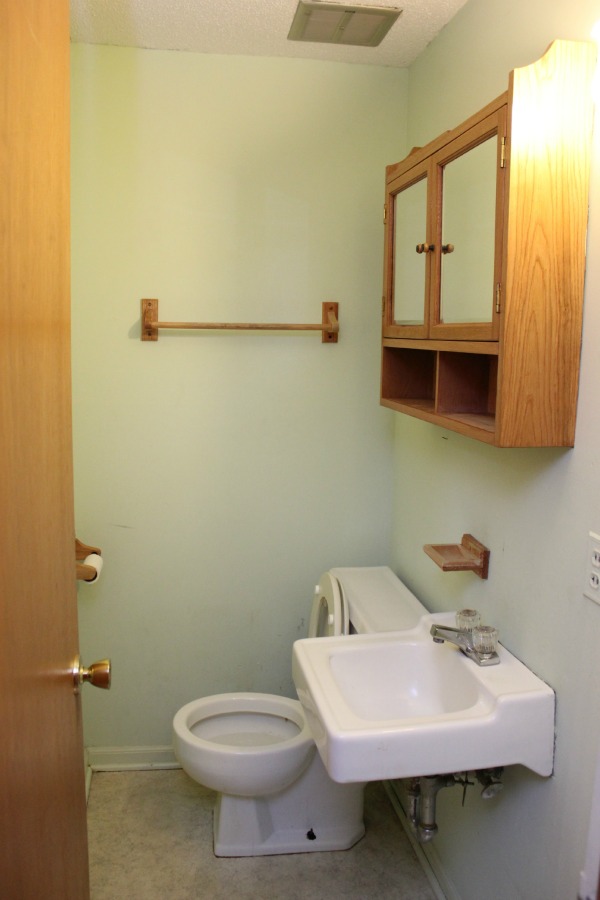 This bathroom kind of gives me the heebie-jeebies. It’s just off the den area. It’s T-90 (tiny and when I say it like T-90, I mean really tiny) and everything just looks so ugly and dirty, it freaks me out a bit. #slightgermophobe 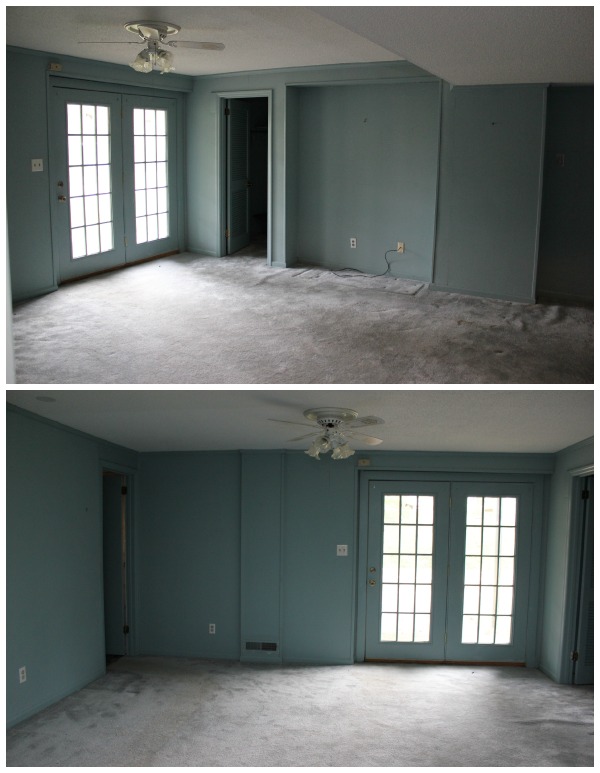 This room is quite a bit larger than Bill’s room now. I think it was actually unfinished basement space at one time. It even has its own bathroom… 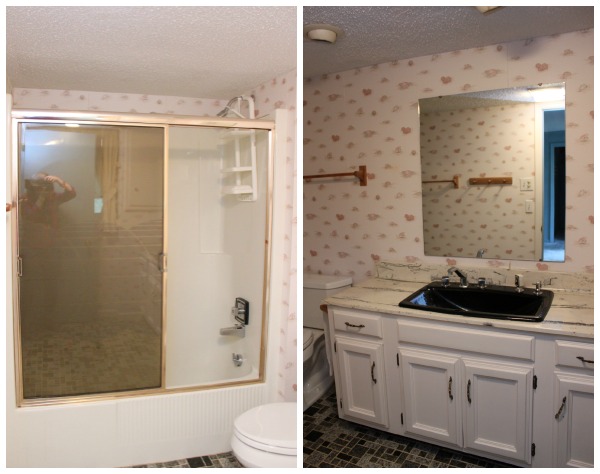 Once you get past the wallpaper, countertop and awful flooring, it isn’t half bad. 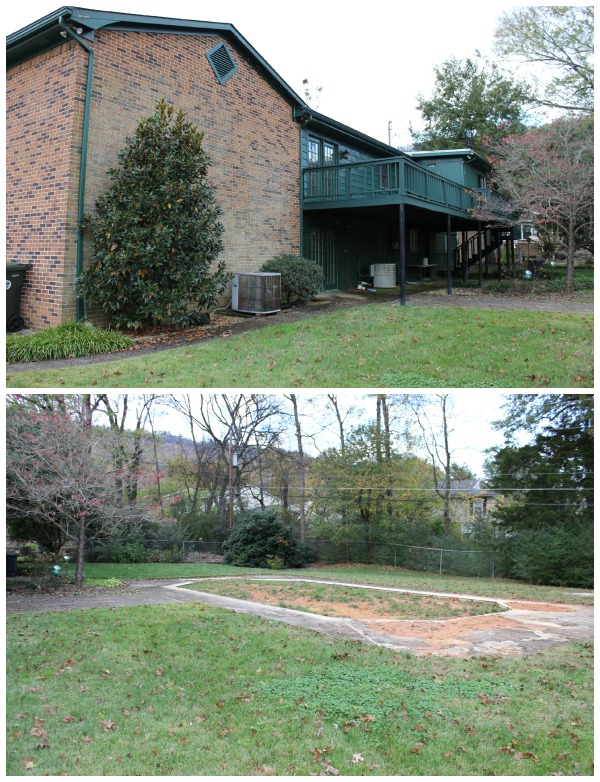 That was filled in a couple years ago because the owners just got tired of dealing with it. WHAT?! WHY WHY WHY?!

I seriously thought Grunt might just cry when he heard that was the only reason it was filled in. He thinks there might be hope for it yet though. Anyone got a backhoe?

If you didn’t put your rose colored glasses on, you can tell there is a whole lotta work to be done. I won’t lie – I am overwhelmed. I am also excited because I know this house – at the risk of sounding cliche – is kinda perfect for us. I’m also very grateful that we found a house so we can get my in-laws down here and have them close by. They won’t be moving down for a while, so we are going to be able to stay in our Beloved Foreclosure while working on the 70’s Landing Pad.

As we come up with plans for the house remodeling, I’ll be posting them and I fully expect you to give your opinions. A girl can’t do this kind of shit alone. 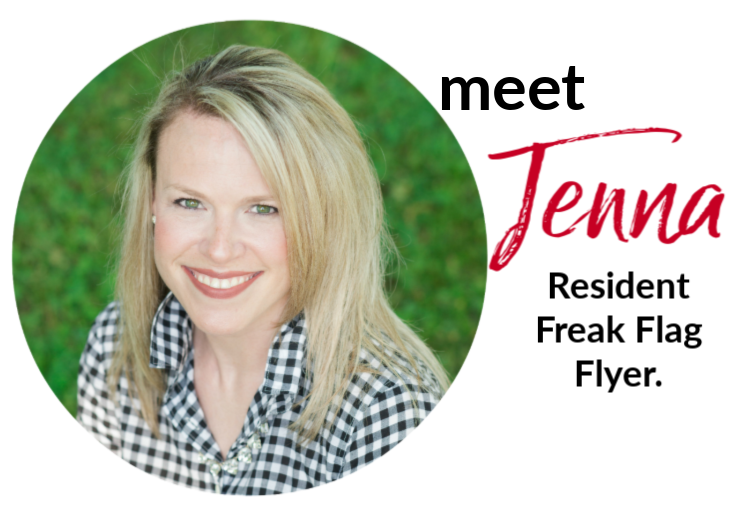