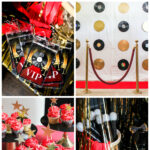 Roll out the red carpet and create your own Hollywood using these red carpet theme party ideas! You’ll throw a VIP party that no one will ever forget!

While the Circus’ birthday is in May, she started talking party themes in January.

And promptly after her birthday party this year, she started talking themes for next year’s party.

I told her she had to nail down a theme no later than one month before her party. She was all over the place with themes, y’all – Power Rangers, dolphins, cats, dance party, dadadadadada.

A few days before the deadline, she said she wanted a “country music awards party.” Yes, you know my heart swelled in that moment, folks.

The more we talked, the more it became obvious that she wanted lots of different types of music played at her party though – not just country and she also wanted people to dress up if they wished. So, we morphed her birthday party into a red carpet party that encompassed her country music awards party and a little touch of Hollywood…

For her invitations, I wanted to combine the music and red carpet themes together.

I made her invitations myself using Picmonkey. On the back, we taped on another piece of paper that had a URL for people to go to to RSVP and add some songs to the party playlist. I know – we’re super extra. And unapologetically so.

Upon entering the party, every kiddo got their very own All Access VIP pass. The kids loved them and thought they were so cool. Again, I made these myself using Picmonkey. I bought this pack of lanyards to put each pass in. Get the VIP pass printable file here! These also made a great party favor for the kids.

After receiving their VIP pass, the kids went downstairs to the VIP lounge (a.k.a. the cleaned out den). On the way in, they could stop by the swag station and adorn themselves with gear if they so wished.

To create the backdrop for the swag station, I hung up a couple of black plastic tablecloths from the ceiling and then layered on a gold fringe backdrop. On top of that, a simple “7” balloon.

I put a table in front of the tablecloths, then covered that with another black tablecloth and pulled some of the gold fringe over the table. I used shiny things from around the house to hold all the swag.

My ice bucket collection came in pretty handy – two of those held the play microphones I made for the kids. Tutorial for the DIY kids microphone is here! I used a small acrylic vase to hold play pearl necklaces.

Even the marble cheese board got in on the action! It held top hats and bow ties. All the swag doubled as party favors for the kids as well.

The red carpet runner in front of the swag table led on into the VIP lounge….

I took one wall in the den and created a backdrop to pose against when walking the red carpet.

Tutorial for making the backdrop is here! My bestie, Jason came through with all the albums. He already had some that were painted gold, so I didn’t have to paint any! Always have a friend who is extra like you, folks. They are often the only other one who gets you. 😉

I just couldn’t bring myself to do a red carpet party without stanchions. These are really expensive to buy and I did find a place where I could rent them locally, but for less than the amount to rent them, I was able to make my own that we can keep for future parties or for the Circus to play with anytime. I’ll have the tutorial up for these soon!

The Circus wanted dancing at her party. In order to create a dance space, I moved a few things out of the den and rearranged the sofa to provide a big open space for dancing between the lounge area and the backdrop. I strategically placed the sofa in front of the fireplace so no drunk on Capri Sun kiddos would fall into it. 😉

For decorating here, I hung plastic red tablecloths over the bookshelves, then hung more gold records on top of them and threw in some albums to add to the decor.

There were also trophies for the kids to take home as favors, since this was a red carpet music awards party. 😉

And of course, cupcakes.

The Circus requested cupcakes instead of a cake, so that was easy for me – Hello, Publix! I made simple cupcake stands by gluing old records to candlestick holders spray painted gold.

For toppers, I cut some stars out of gold card stock using my Silhouette and then hot glued two together per toothpick. Easy peasy.

A good time was had by all.

And don’t think for a second those stanchions and red carpet didn’t get toppled over and pulled up by the crazed dance party a time or two.

That’s a wrap for our red carpet birthday party. We definitely do birthday parties big around here, I won’t deny that, but they’re only little once right? Before long, she’s just going to want me to drop her at the movies with her friends for her birthday. 😳

DIY Party Background for $5 – use this video tutorial to make a super simple party background in whatever colors fit your party’s theme!

Simple DIY Party Decorations on a Budget – lots of ideas for party decor that can be customizable to all sorts of different party themes.

Picmonkey Invitation Tutorial – learn how to make your own party invitations using the online photo editor and creator, Picmonkey.

Want to save these red carpet ideas for later? Just pin the image below!

Keep up with me on social media!