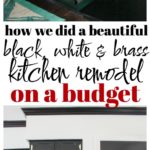 I need to be clear on something.

This remodel of The 70’s Landing Pad has not been a one man band. It has not been a two or a three or a four man band either. It’s more like a fix or six man band, made up of random friends and family pitching in to help out as needed, fueled by cheap beer and 80’s country music.

This kitchen remodel showcases the specialities of each band member.

Does any of that even make sense?  #FlyYourFreakFlag

Maybe it will help to just start showing you pictures. When we first got this house, this is how the kitchen looked: 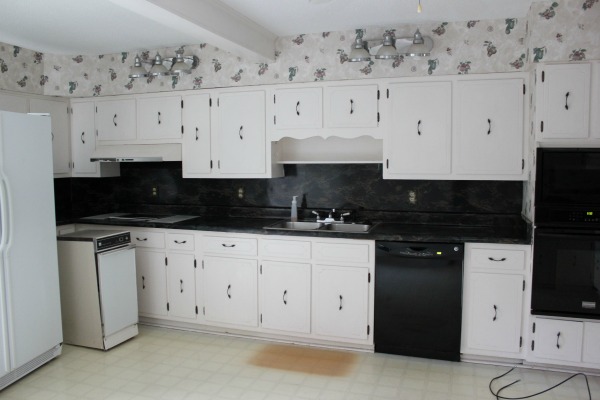 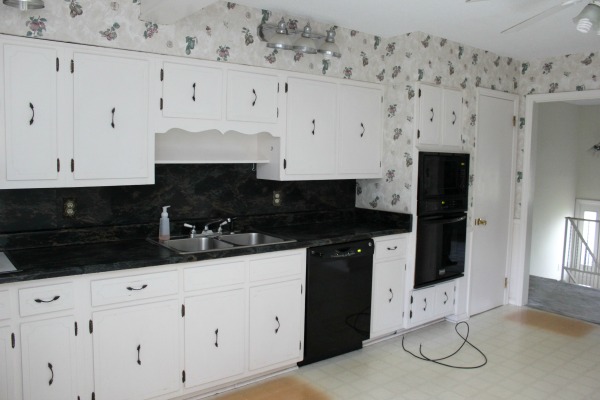 Opposite that wall of cabinets was this: 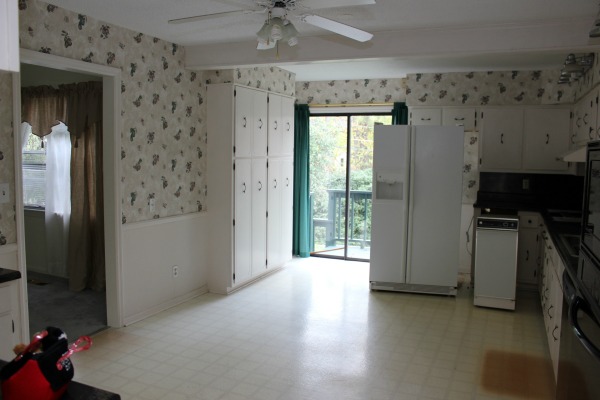 And opposite the pantry door was this: 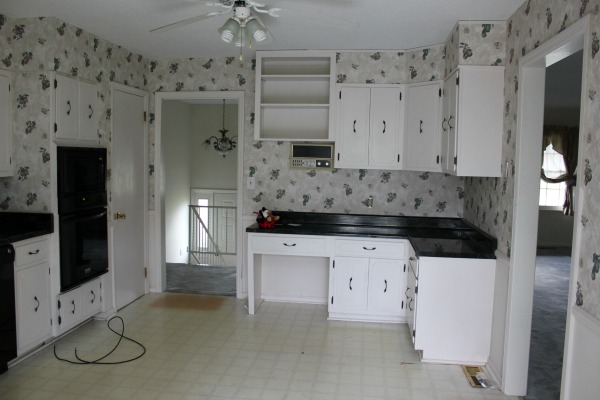 The kitchen was a really good size to start with, so we didn’t need more room, however the awful wallpaper, awkward vanity lights above the cabinets (WTF?), stained vinyl flooring, grimy cabinet hardware and much more needed to get the boot. 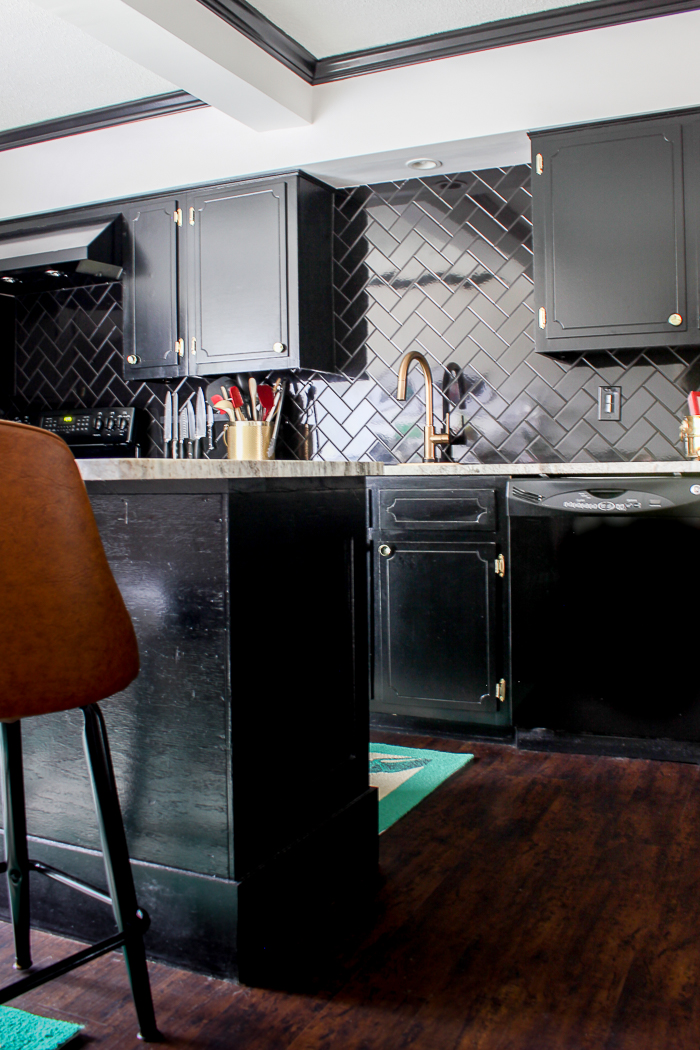 We kept the original cabinets, with the exception of taking out the ones above the stove and sink, and I painted them black. These cabinets really aren’t in the best condition, but it just wasn’t in the budget for new cabinets. I’m hoping in a few years, we can maybe have new doors for the cabinets made. 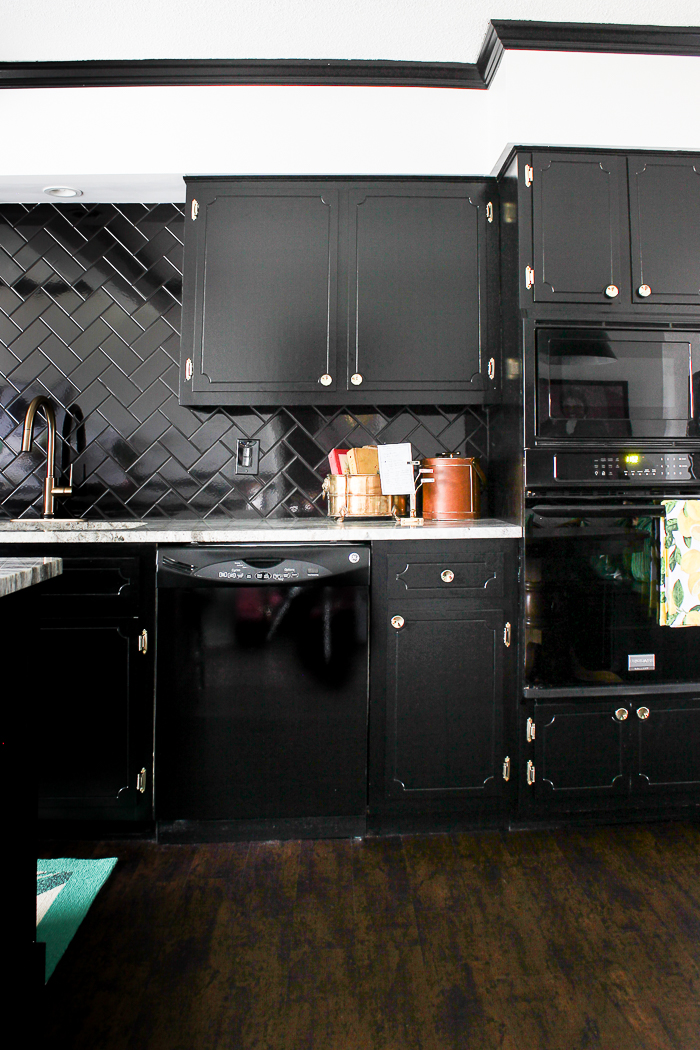 I switched out the knobs and hinges on all the doors and drawers. I tried quite a few different styles of knobs and pulls, but in the end I was surprised that these simple round concave brass knobs which are less than $1 per knob were perfect. 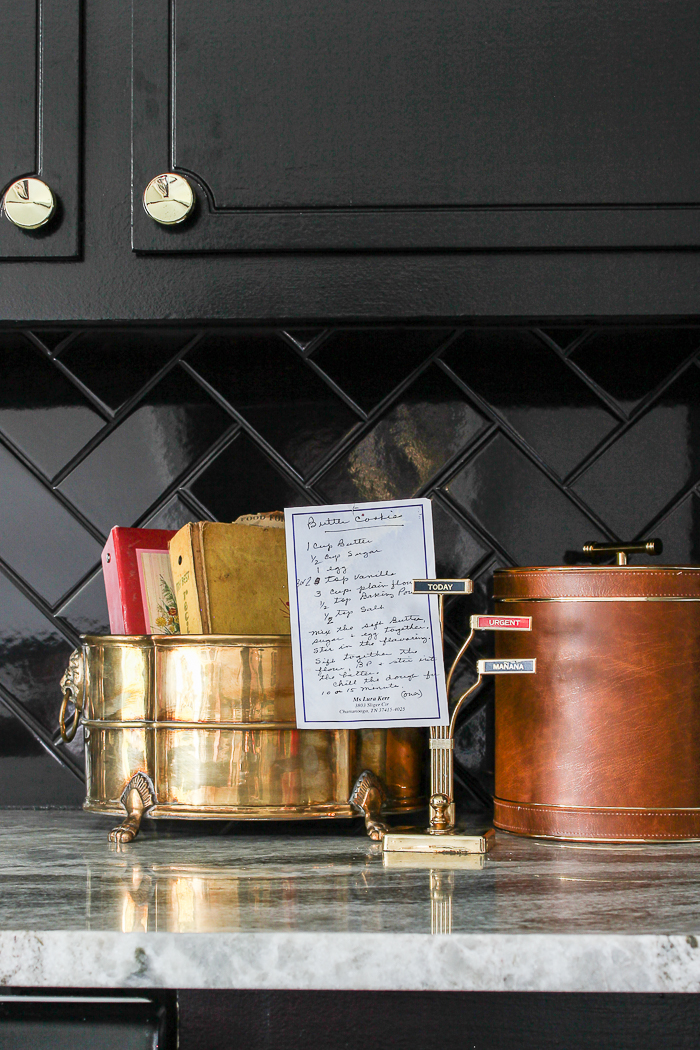 With all the brass and black, the kitchen had a more glam feel, which our previous kitchen did not. Our old canisters and counter decor just didn’t mesh with this kitchen as well as they did our last. I decided to think outside the box for counter storage (and also within our small budget) and raided my vintage ice bucket collection to find one to act as a canister for sweets and another to act as a cooking utensil holder. I pulled out a $1 office decor find from an antique store to be a recipe holder and the brass lion bucket was only $3 at an estate sale. It holds two smaller cookbooks that I use a good bit. 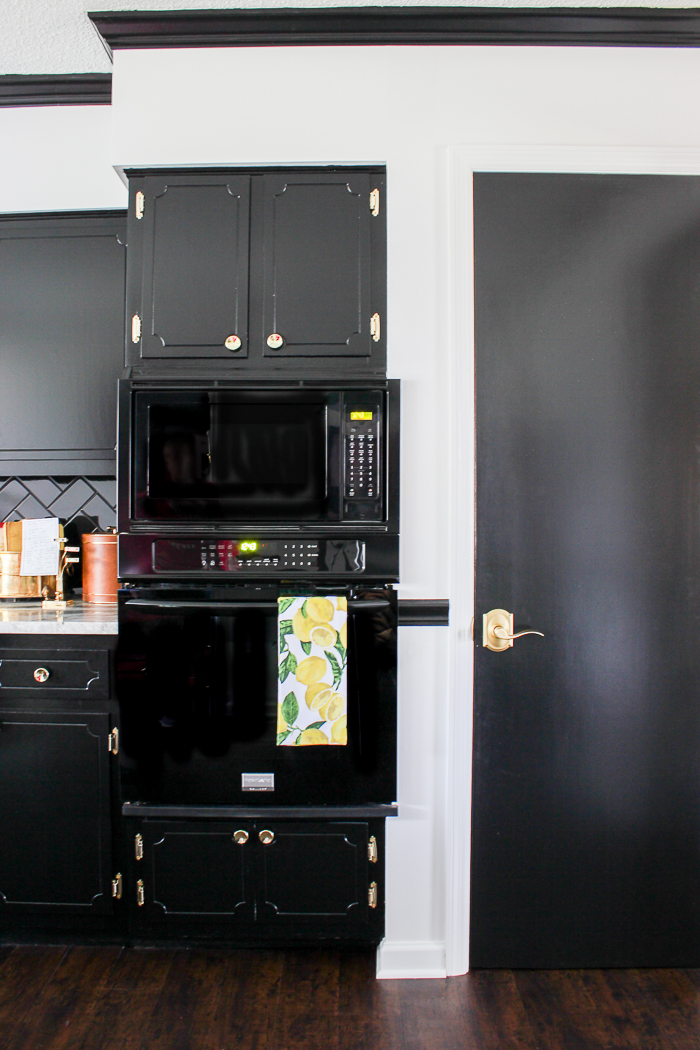 There wasn’t any guesswork when it came to the flooring, we knew we would carry the same flooring we used in the adjoining living and dining room into the kitchen as well. However, the white walls were a different story and probably caused me the most stress in this space. When I first started on the design plan for the kitchen, I decided on black cabinets and white walls. However, that combination became very stark against one another when it was all in place. And on one side of the kitchen, I had a lot more black with the cabinets than I did on the other side of the kitchen, which had no cabinets. I tested out no less than 15 paint colors to go on the wall from greens to grays to creams and more and none of them worked. Both Grunt and my friend Brittany were adamant that white was the color it should stay and I should have just listened to them from the beginning and saved myself the stress. Grunt was also the one who made the suggestion of putting up black crown molding to balance out all the black and was he ever right on that. When he told Mom and Dad about his idea, they offered to pay for the crown moulding (Thank you!), so we got that sooner than expected and it was a total game changer. It pulled everything together perfectly. 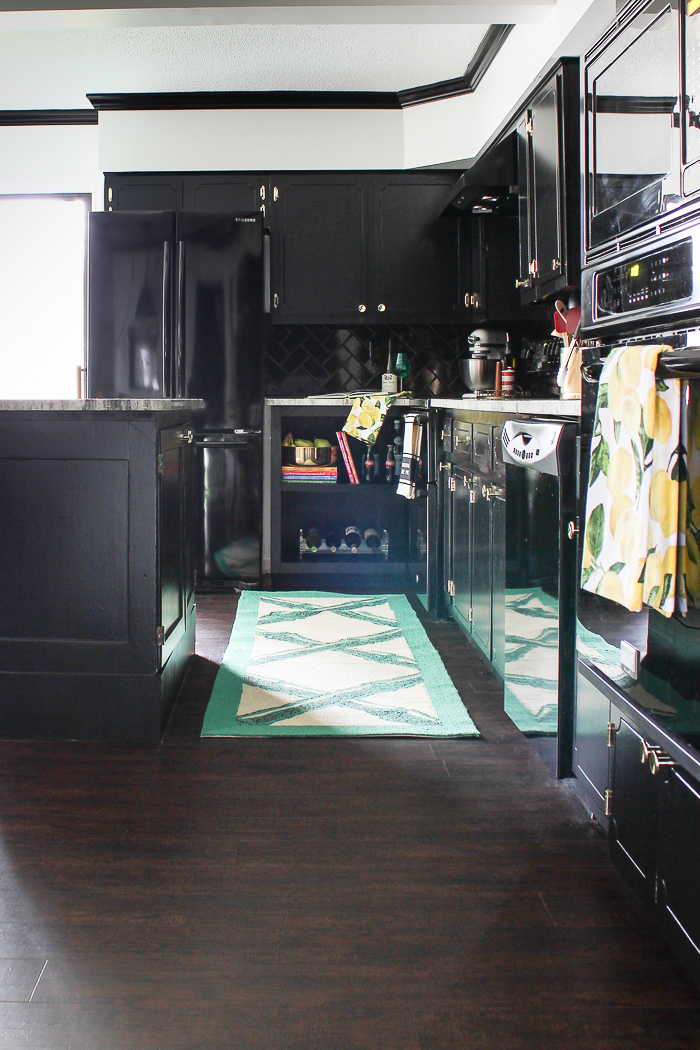 The island was an addition as well and also one that I doubted in the beginning. I wanted an island in here, but I was very much overthinking it. The island is actually a cabinet that was in the school that Grunt Labor and I first met and worked together at. They tore down the building and we snagged that piece before they did so. He said from the beginning that it would make a great island, but I wasn’t sure. Then, Nicky’s dad, Wayne, came over and we were discussing building an island and he looked at that cabinet and said it would be the perfect island. At that point, I knew I was wrong and they were both right. Wayne took the cabinet home with him and modified it into an island for me. 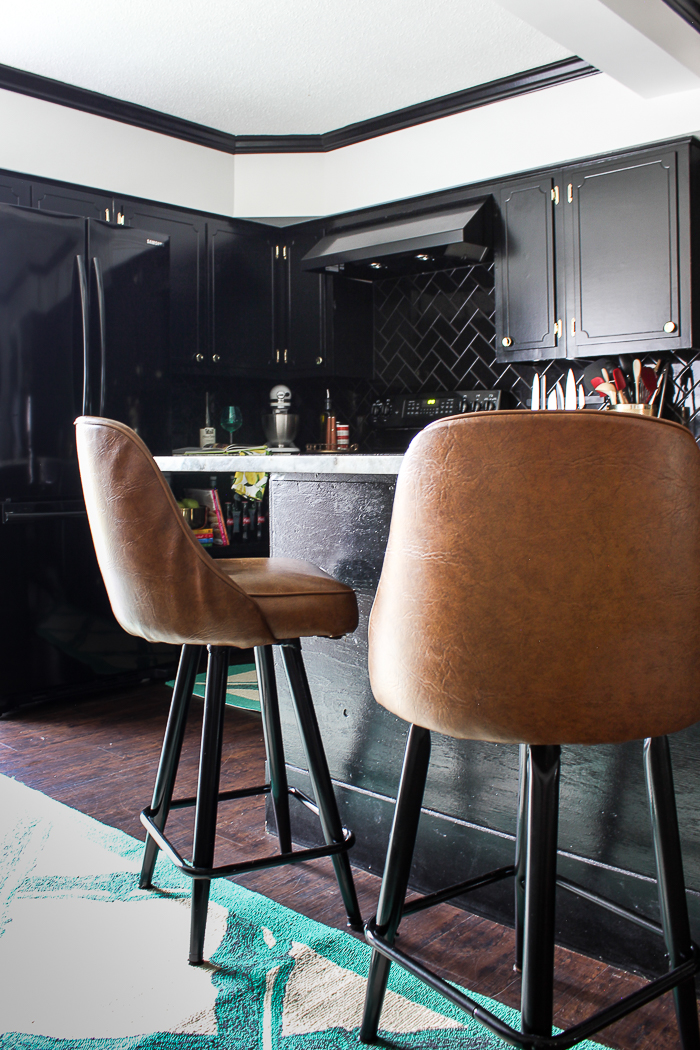 The barstools were a vintage find at a resale store. There are similar ones here. 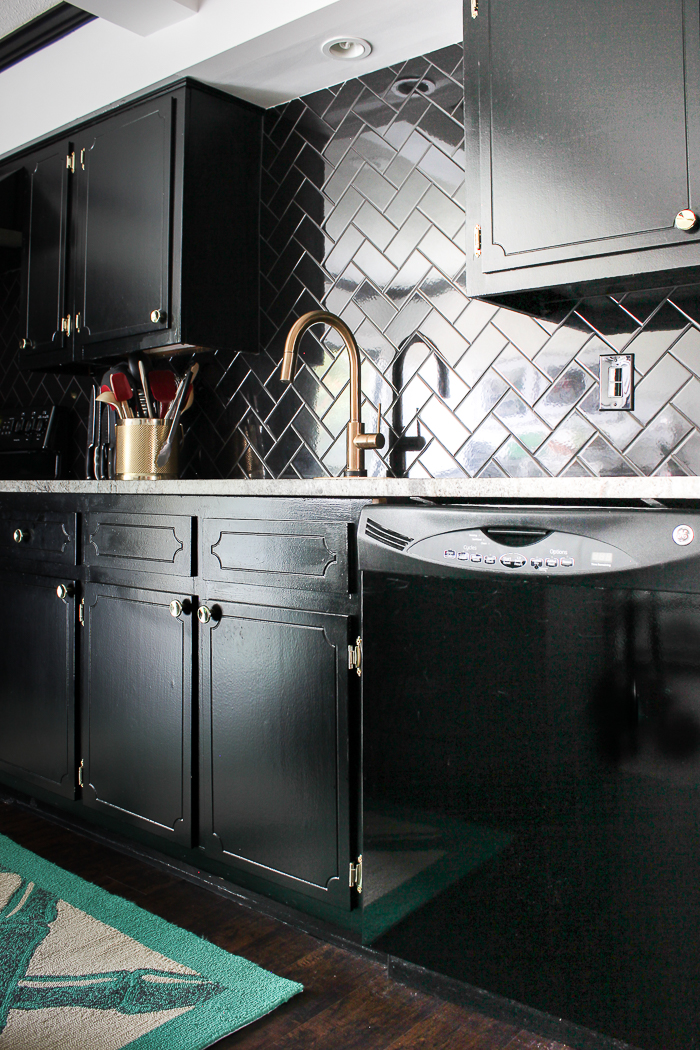 The one thing I never swayed on in this space was the black subway tile backsplash in a herringbone pattern. It might actually be my most favorite part of this space. Grunt and Nicky usually do all our tile work, but they both refused to do this backsplash because I wanted the herringbone pattern. It is much more tedious and time consuming. I ended up going through Home Depot, using their in-home installation services for the backsplash. While it was more expensive than doing the tile ourselves, I knew the herringbone pattern would be a showstopper and well worth it. They did an impeccable job. 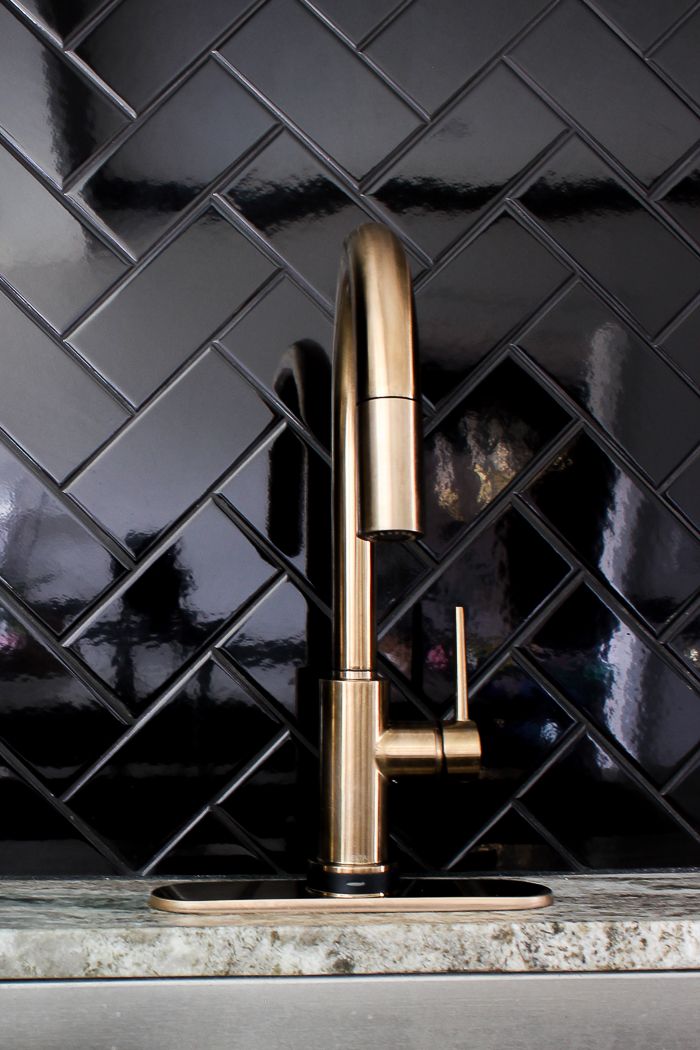 The faucet is the same one we had in our old kitchen. My in-laws wanted something in brushed nickel at our old house, so I happily switched out the faucet for them and brought this one to the new kitchen for us. 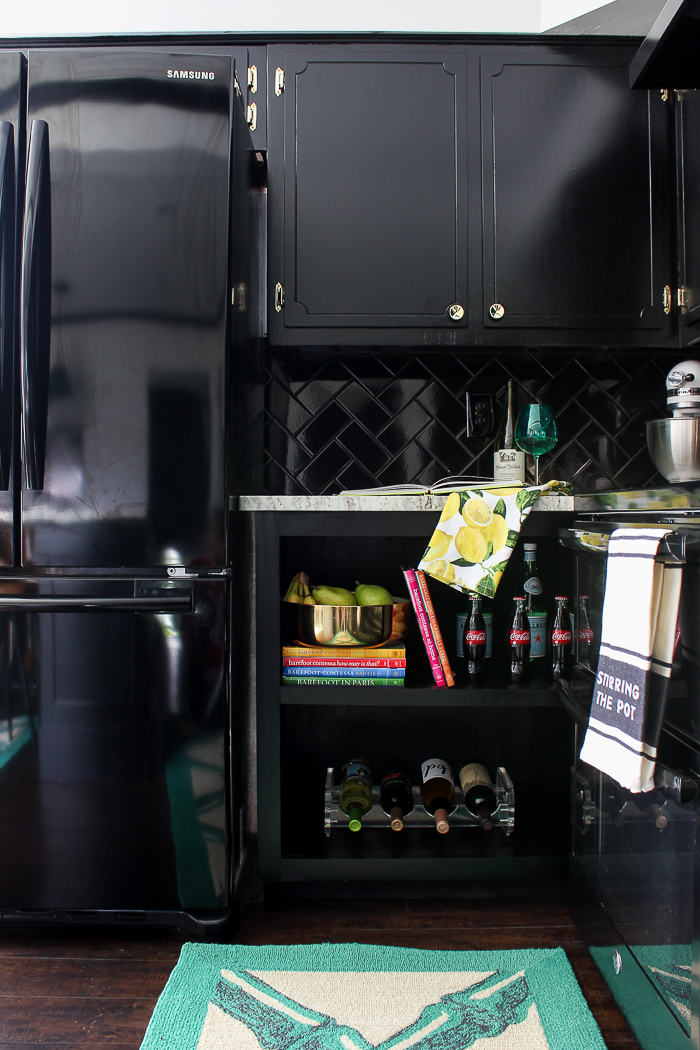 You might have noticed in the before photos, there was a stovetop on end of the kitchen and a wall oven on the other end of the kitchen. The old stovetop didn’t work correctly, so rather than replacing it with just another stovetop only, we opted to replace it with a double oven. 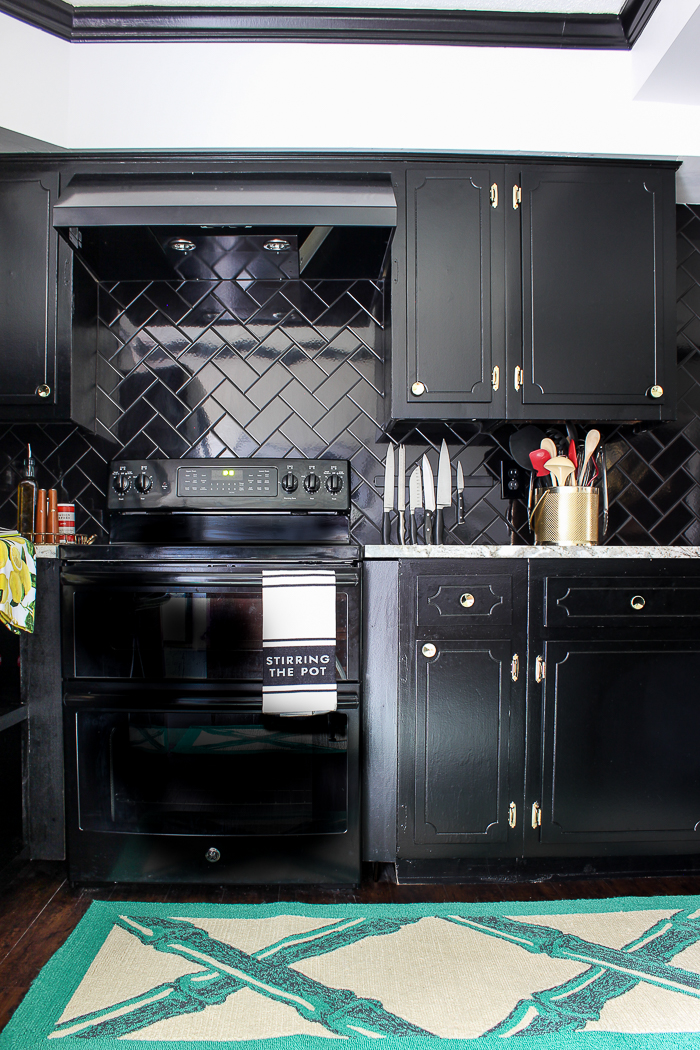 We do a good bit of entertaining and hosting family holiday dinners at our place, so having three ovens makes those things so much easier. We also took out the cabinet above the stove and put in a more effective and prettier range hood as well.

As I said earlier, I used a vintage ice bucket for a cooking utensils holder. We went with this magnetic knife holder to clear up more counter space and attached it with velcro to keep from having to drill into the tile. I have two of those runners, one on each side of the island, to add more color and pattern to the space. The hand towels also add a much needed dose of color.

The open shelving to the left of the stove was also something that Wayne and Ron, another family friend, built for us – we are so lucky to have them! 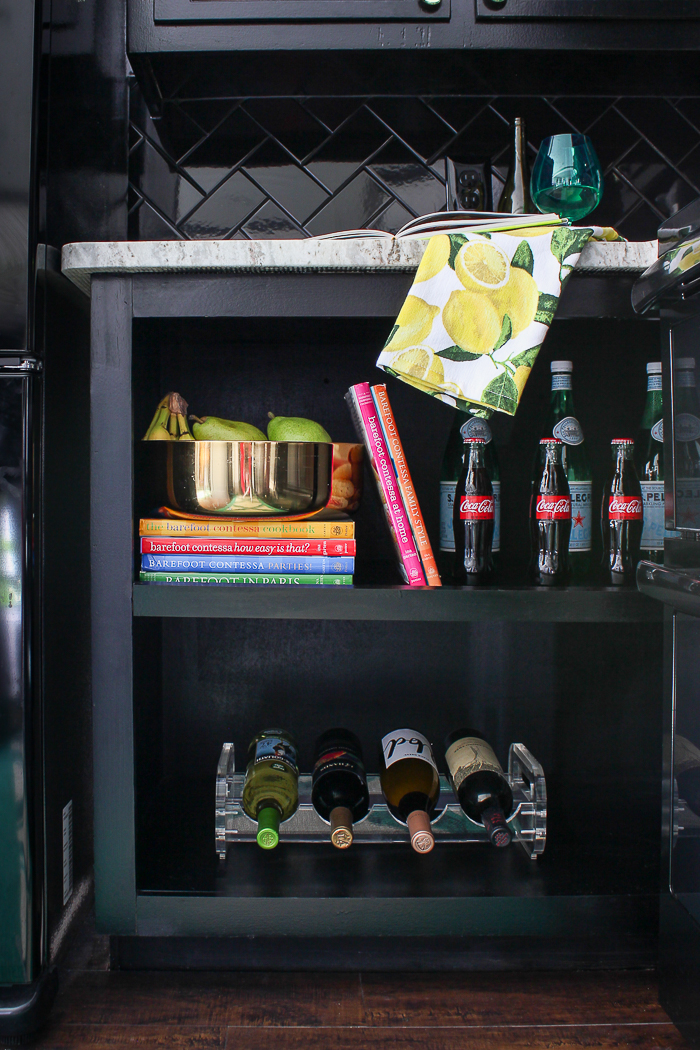 That space used to be where a tiny cabinet and trash compactor were, both practically useless. We took those out and they built me this wonderful open shelving. It’s another favorite thing of mine in this space. This is also where I keep favorite cookbooks, our fruit bowl, wine rack and a few other knick-knacks. 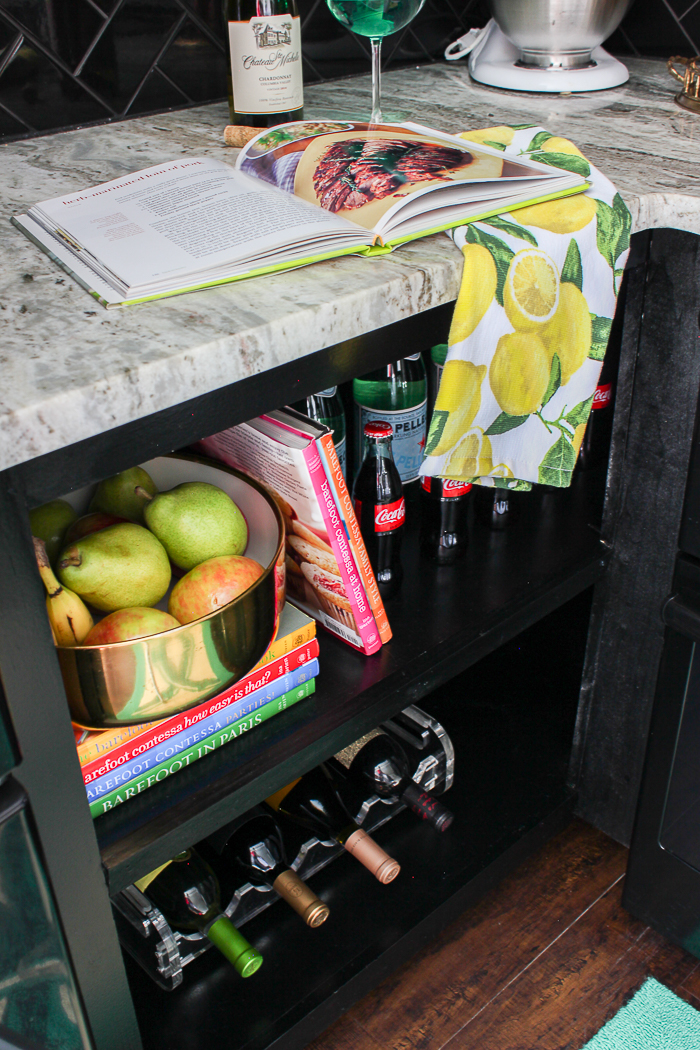 The countertops are Quartz in Brown Fantasy. My friend Kellie gets a huge thank you for dealing with me when it comes to the countertops. I had no clue what to go with or what I even wanted and she held my hand the whole way with it. I never would have looked twice at that stone if it hadn’t been for her and I absolutely love it in here, as does Grunt. 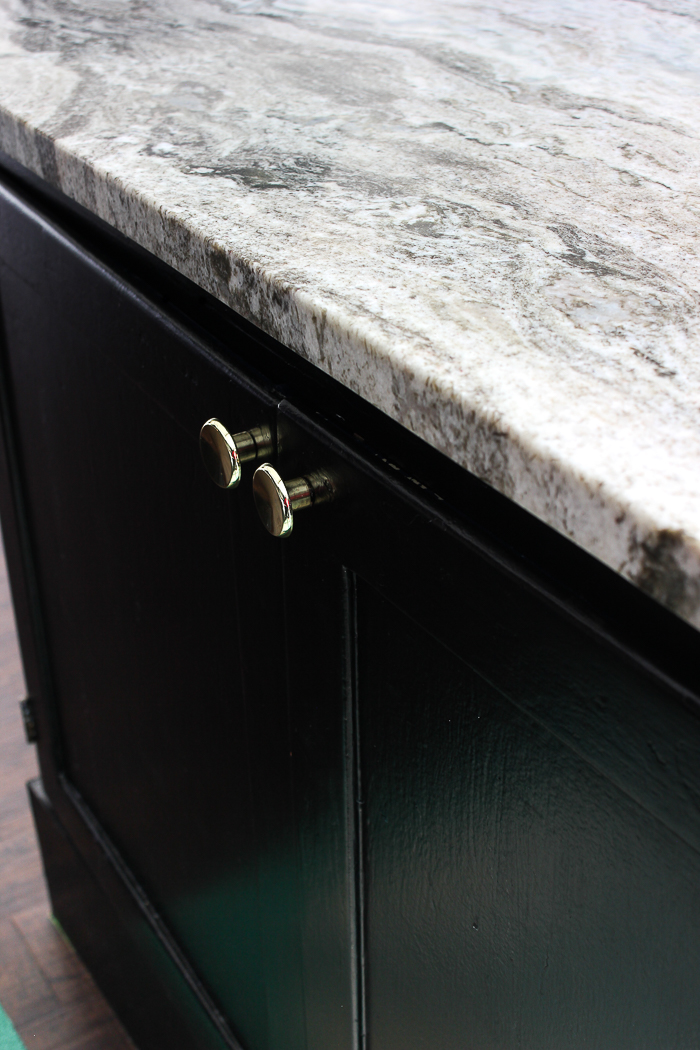 I removed the tall, skinny cabinets that were opposite the range and replaced them with the buffet that was in the living room at our old house. 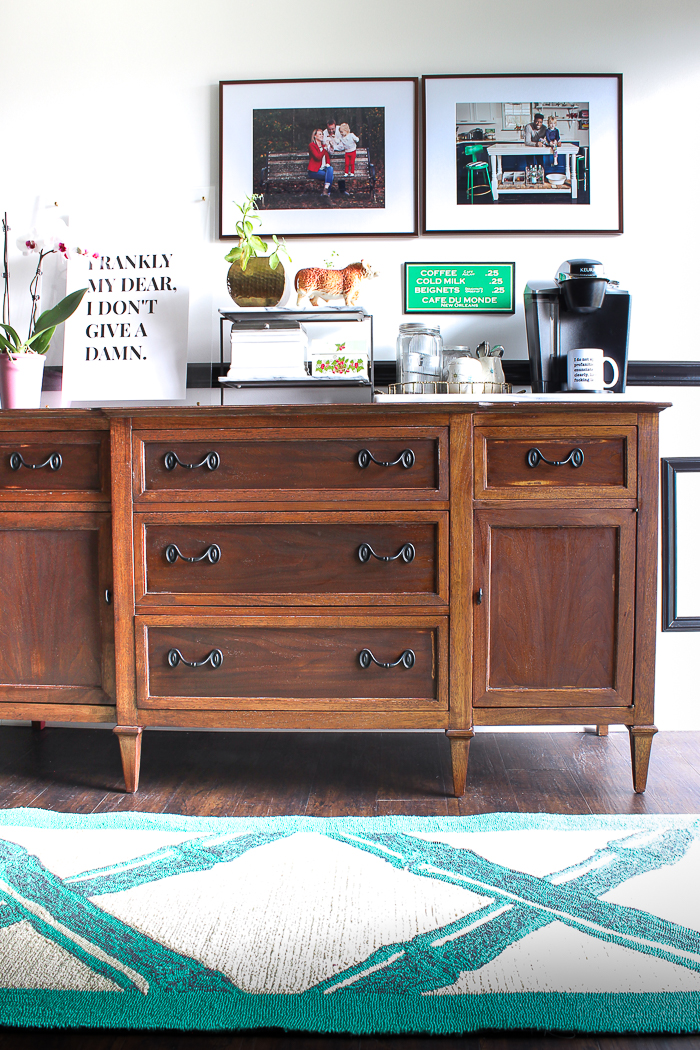 We also added a black chair rail and decorative wall molding here to bring more of the black over to this wall. 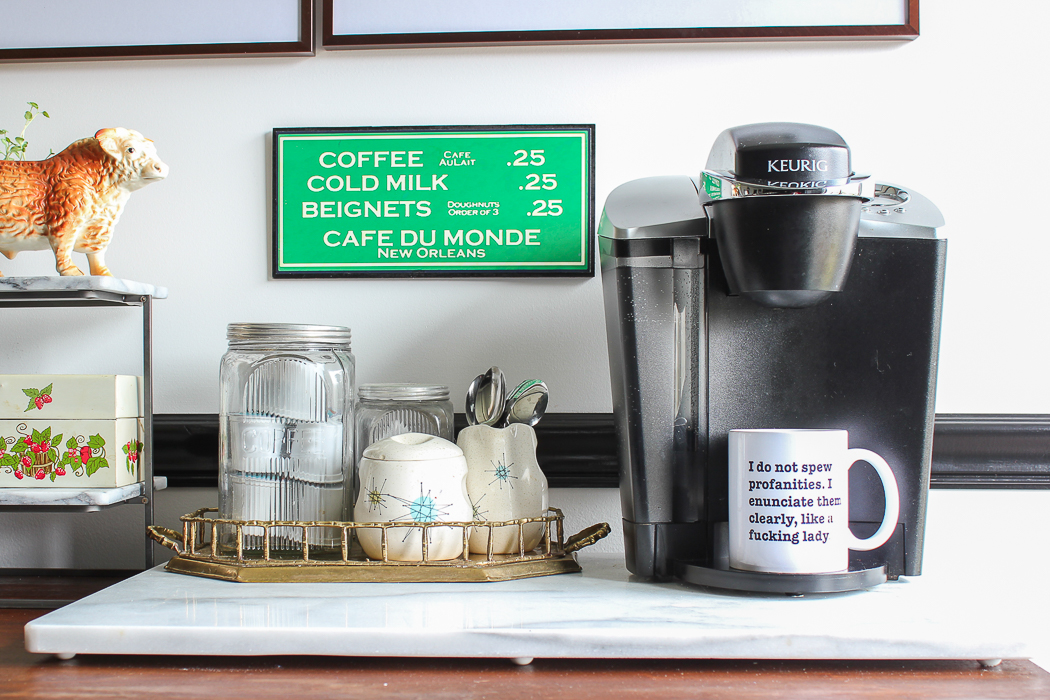 I put my coffee station here as well as a couple of plants and other knick-knacks. 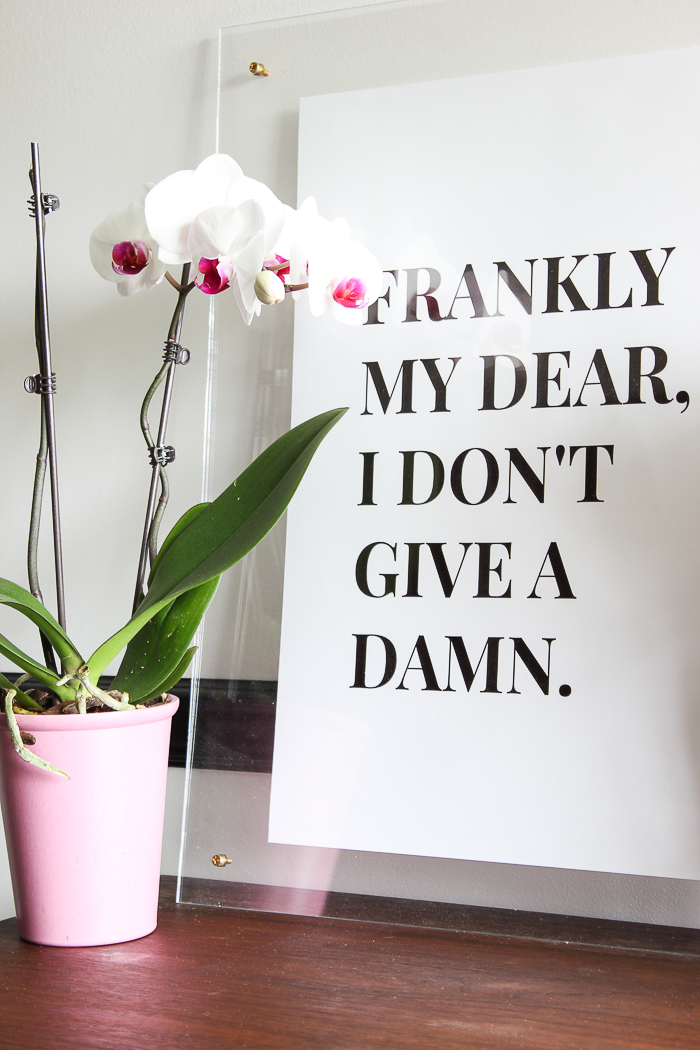 And my daily answer to anything before the hour of 7am. 😉

Finally, where the built-in corner cabinetry and desk once was is now our breakfast nook. 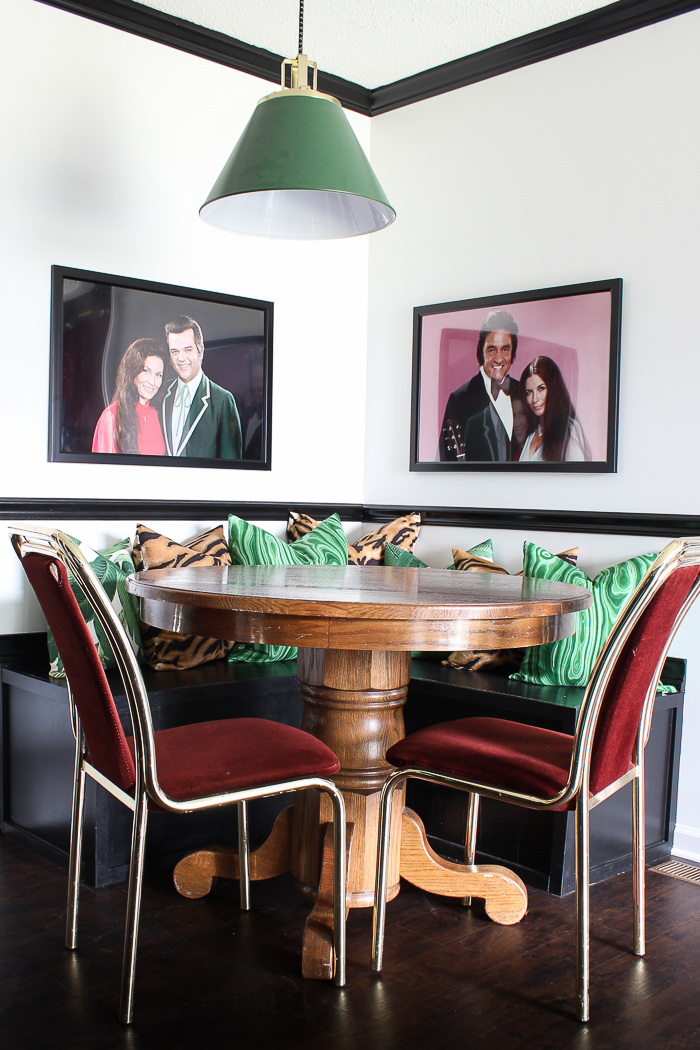 This banquette is all thanks to Grunt and Nicky. 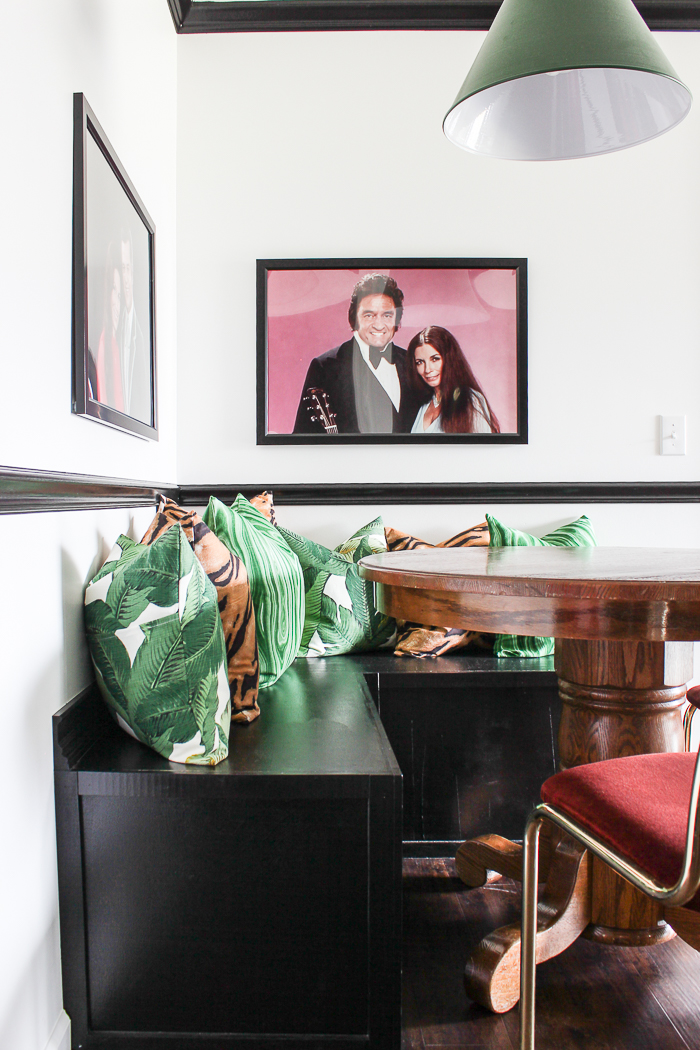 You see, I had this wild idea that I could actually build it all by myself.

I was full of shit.

They both swooped in, calmed me down and helped me finish it. That’s a whole other story which you can read about here. I also added more color to the kitchen here with the pillows, which was a whole other stressful ballgame that I can’t even think about right now.

So in conclusion, thank you to all the band members who made this kitchen possible: Grunt, Nicky, Brittany, Wayne, Ron, Kellie, Mom and Dad.

There will never be enough cheap beer in the world to pay you back. We are blessed to have you.

Lord, I hope I didn’t leave anyone out. It takes a lot of people to deal with this crazy train.

Types of Paint to Use on Cabinets 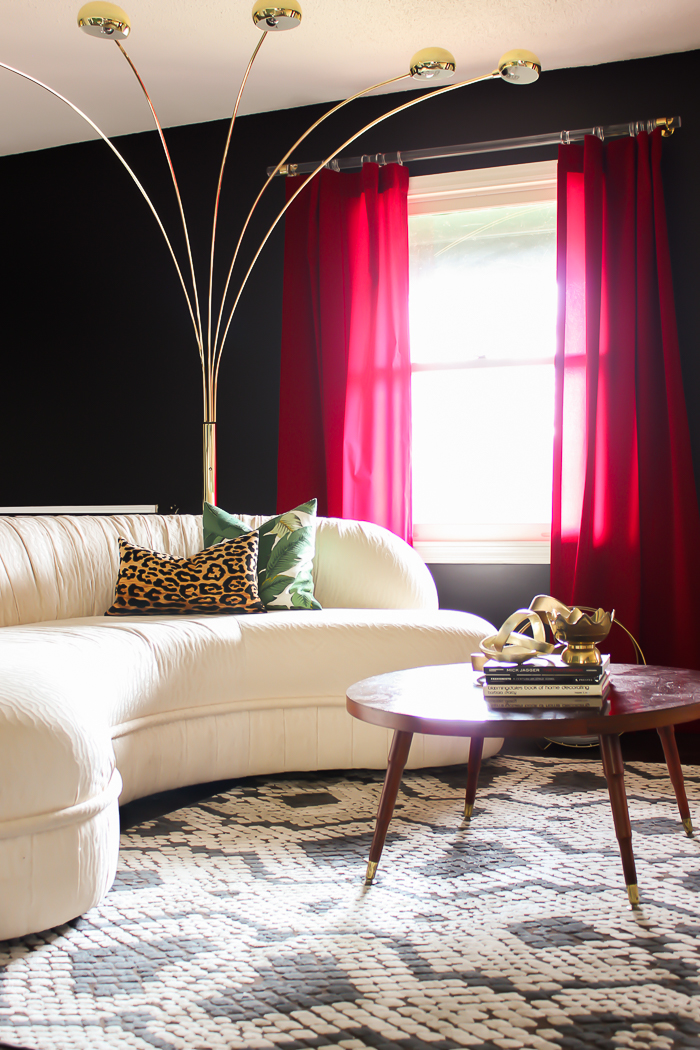 Disclosure: D. Lawless Hardware provided the cabinetry hardware for this remodel and Rug Studio provided the runners, however all opinions are 100% my own.

*Affiliate links may be contained in this post. That just means that if you click on one of those links and buy something, I may receive a small commission, but you won’t pay a dime more.