My friends and I have two or three yard sales a year. We’re starting to consider ourselves professionals. In fact, I even wrote about our best tips for yard sales in this post.

Of course, one of the reasons our yard sales are so successful is because not only do we get entertainment from many of our customers, but we also provide it for them. I can’t tell you how many people have asked if they could pull up a chair and join us.

Last Saturday, we had one of these yard sales. As usual, we weren’t let down in the entertainment department. It’s usually just four of us, but this time around (and for all future yard sales because I’m making it a rule now), Jason, joined us. You might remember Jason from the post about when we were all turned lose in the city one night. All of us, with the exception of the baby of the group, Brittany, graduated from high school together.

Jason rolled in on two wheels in his little green S10 truck that he drove back in high school and had to go back home to borrow from Mama Judy. Hand to God, that truck’s rear end was dragging the ground from all the shit that was in the back of it. Never in his life has Jason been considered a redneck, but in that one moment, you would have thought he would have popped out of that truck, with a dip in his mouth.

Now, I meant to take a picture of it, but after I contained my laughter, I realized he had vintage rattan in the back of that bad boy, so I beelined over to check it out and subsequently forgot about the picture. Remember the Clampetts though? Well, Jason’s truck was a modern-day recreation of the Clampetts. I shit you not.

Due to forces beyond his control, half of this stuff he pulled up with was considered “Pure Profit” in our books. And that ain’t a bad thing. 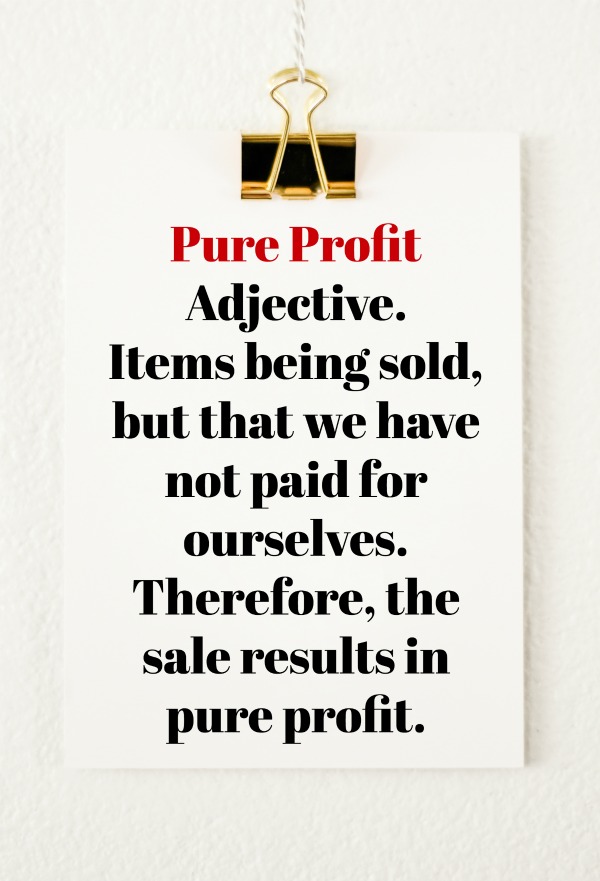 At our yard sales, pure profit describes items that we are selling but have been given to us in some way. They may be gifts we didn’t exactly like, abandoned items such as bikes, hair straighteners, furniture and random toys that college students left in their dorms while you were a residence advisor, things your parents gave you to sell because they felt bad for you when you told them cash was low and you were having to sell your stuff at a yard sale to make ends meet. Ok, that last one is a bit of a lie.

Those items my friends, are bonafide pure profit. Doesn’t matter if it makes you $5 or $0.50, pure profit baby.

During the unloading of Jason’s treasures, we were introduced to multiple stages of Jason that we had missed out on after high school and prior to our reunion. 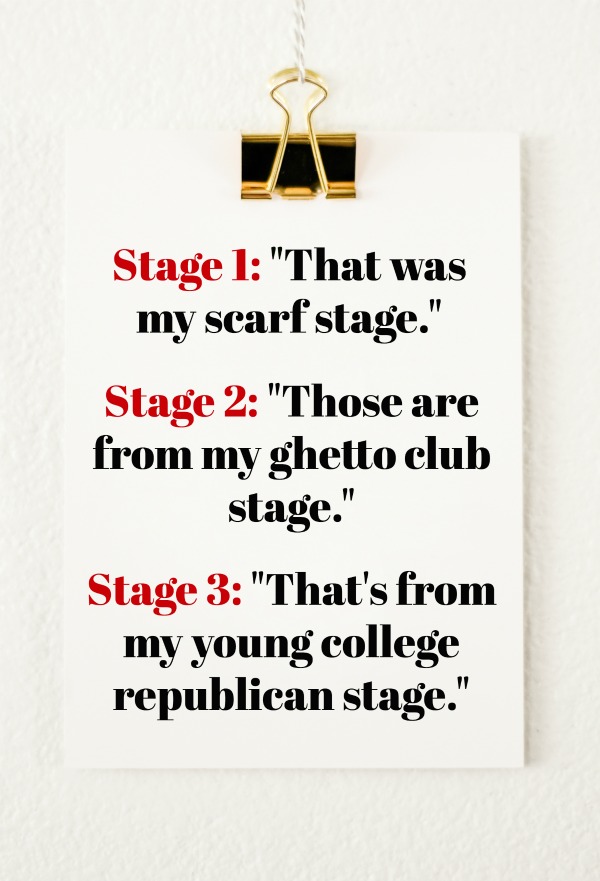 I’m happy to say that all but one of the “stages items” sold. Someone else is now living their scarf and ghetto club stages though Jason’s treasures. Unfortunately, the republican shirt did not sale. #iwonderwhy That’s all I’ll say about that though.

While mulling over where to go for our post yard sale late lunch, we all agreed upon the menu at the Last Supper. 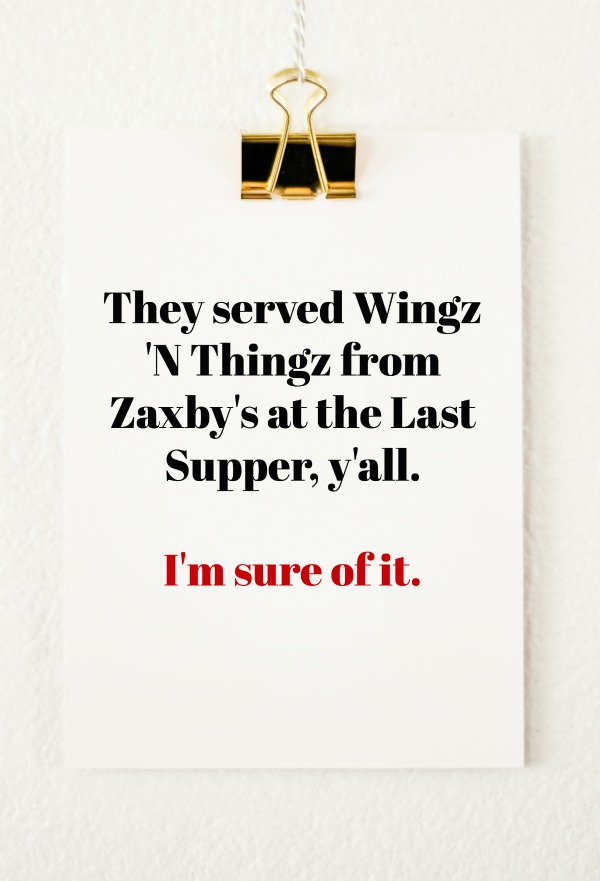 However, we opted to go to a different location where more alcohol was being served.

I finally drank Arbor Mist that I had so coveted during the commercial breaks of my childhood. 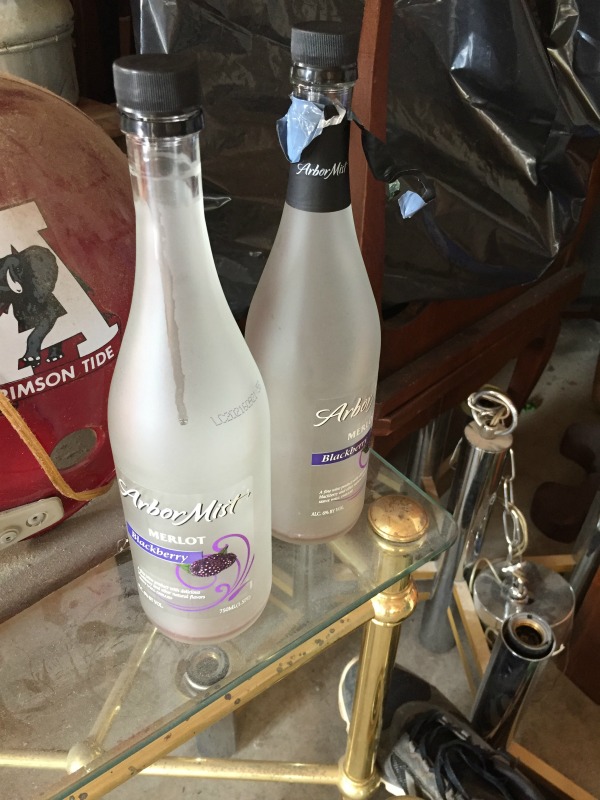 Unfortunatley, after the first drink, I was still rocking sweats and had not become the gorgeous woman who had been in the commercials. A Fabio type man didn’t appear either. It was a real letdown. 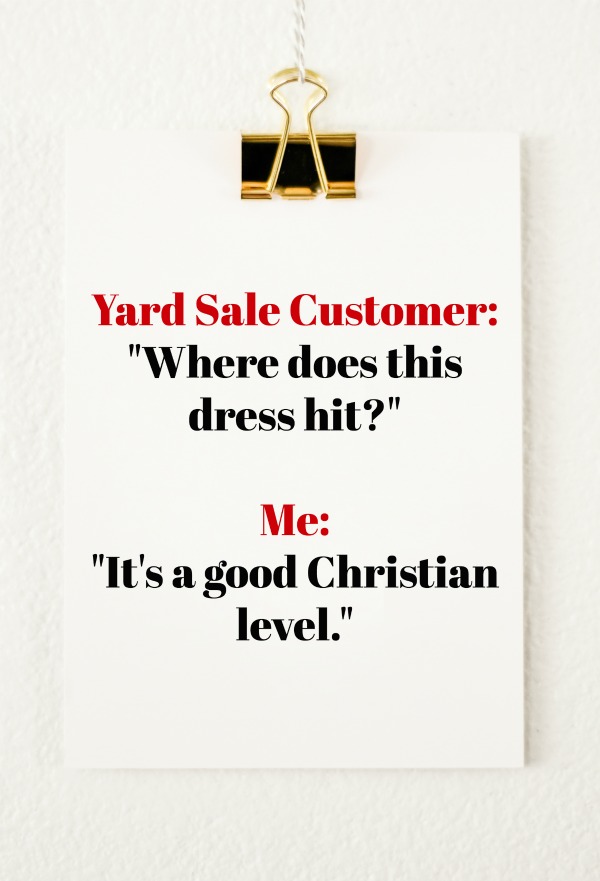 She bought the dress. Guess she’s a good Southern Christian girl too. 😉

The pinnacle of our yard sale though that day was a visit from one of our own former principals. He didn’t have the slightest clue that a reunion was about to take place. He greeted us appropriately though.

And I’ll leave you with that.