Over the past month or so, many of our weekends have been spent putting up a new fence around a hayfield at the farm. To be exact, 2,650 feet of fence, which equates to 307 steel posts, 27 wood posts and 8 spools of barb wire. So ya know, a pretty damn long stretch of fence.

Now let me go ahead and say that I am the unskilled labor when it comes to the farm. Well, maybe I could move myself up to the bracket of minimally skilled labor now, because I did actually learn to use the hydraulic wood post driver and didn’t cut off anyone’s hand in the process. For the most part though, I am the official gate opener, runner of supplies and any other tasks requiring a low amount of skill. Basically, when we do work on the farm like this, my goal is to be as helpful as possible without doing anything stupid that will slow the job down or eff something up.

After working in the field sinking metal posts (to clarify, I only set the posts out to sink, helped run the string, and moved the truck on down the line, remember – minimally skilled labor here) all day a couple of weekends back, the boss man (my uncle, who says he isn’t the boss, but he is, so I call him that just in order to get under his skin) needed a break, so he gave me directions, then took off for the house.

What boss man, nor I, realized at the moment was that he also took off with all the tools required for the directions he had just given.

I did stand there for a second and relish in the fact that, for once, the boss man, and not the minimally skilled labor, had done something to slow down the job.

Not being able to do anything more until he got back, I saw this as a prime opportunity to take a potty break. While the boys can just turn around, unzip and do their business, it requires a bit more time for this only girl in the field to take a tinkle. And as I’ve said, I try to not do anything that will slow the work down, so I’ve learned how to hold it and watch my water intake.

So I did what any minimally-skilled, semi-classy country broad would do in my situation – I popped a squat in the most relatively private place I could find in the middle of a hayfield.

Still not seeing boss man anywhere in sight after doing my business, I decided to take a break and Grunt joined me on the shade side of the truck. 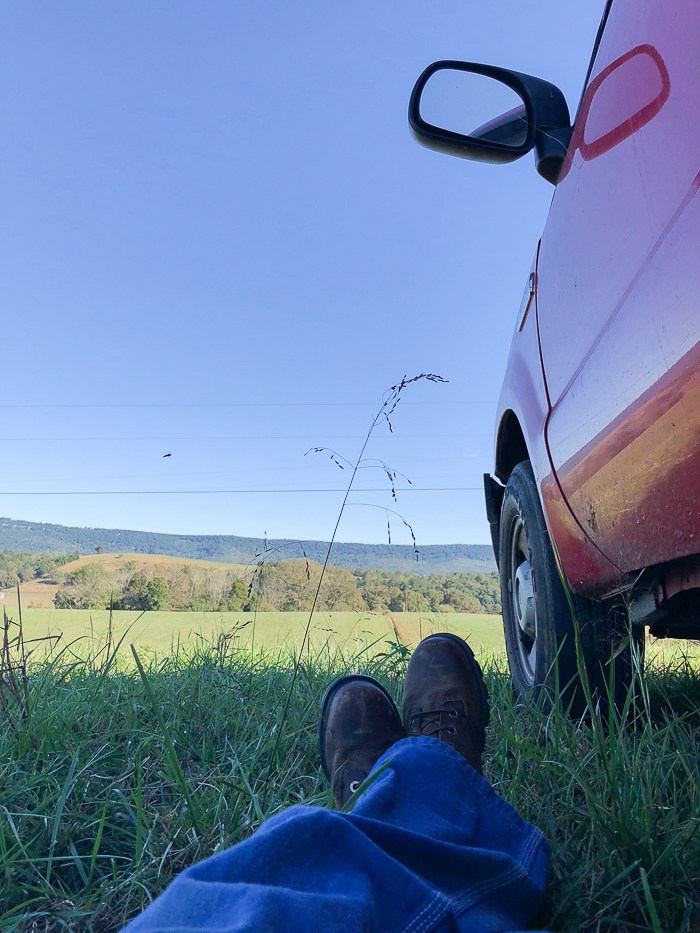 He sat down and I laid down in the grass beside him, resting my head in his lap – obviously a romantic scene just waiting to be filmed for the greatest country love story ever told.

“It sure is,” I said, “You’re sitting about a foot from where I just popped a squat.”

“I thought my butt felt a little wet on that side.”

The most relatively private place to pop a squat in a hayfield also often tends to be the shadiest one.

Neither one of us felt the need to move.

I guess it really is love then.