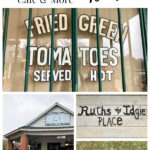 If you’re a fan of Fried Green Tomatoes (the movie!), then you’ve got to plan a trip to Juliette, Georgia, where the movie was filmed. You’ll love eating at The Whistle Stop Cafe and seeing all the landmarks from the movie in this charming little southern town!

I think Fried Green Tomatoes will forever stand the test of time. Both the actual food and the movie. I don’t know that there’s nothing a plate of good fried green tomatoes can’t cure and I would argue that the same could be said of the movie. It’s in that same category with Steel Magnolias – when you see it’s on television, no matter how many times you’ve watched it, you know you’re going to stop and watch it again and you know you’re going to shed a tear or two as well.

A couple of months ago, two friends and I took an overnight trip down to Plains, Georgia to attend former President Jimmy Carter’s Sunday school class. As it turns out, Juliette, Georgia, where Fried Green Tomatoes was filmed, is just a bit off the beaten path on the way down to Plains. And in Juliette, you can even eat at The Whistlestop Cafe. Yes, the real one that Ruth and Idgie ran in the movie.

Two months later, I’m still giddy over the fact that I really got to go here.

I first fell in love with the movie when I was probably in middle school, so it’s like one of those childhood dreams come true.

We of course ate fried green tomatoes at the Whistle Stop Cafe and they were delicious.

You’d of thought Idgie and Ruth fried them up themselves. In fact, all three of us were very impressed with our meals. Jason put it best – you don’t always expect these kind of places to be really good since a lot of their business is just touristy because people just want to say they went. However, this was not the case at the Whistle Stop – it was all delicious!

After lunch, we perused the rest of Juliette, which is just absolutely charming. We started behind the Whistle Stop and kind of worked our way in a circle.

Just behind the cafe, you can see the BBQ pit where Frank Bennett became some of the finest BBQ the south has ever seen – secret’s in the sauce, you know.

To the left of the BBQ pit and behind some of the other shops in Juliette, Smokey Lonesome’s shack can still be seen.

From here, we worked our way back up to McCrackin Street, the main street in Juliette.

Buddy’s arm is buried along McCrackin and so we stopped there to pay respects, of course.

There are quite a few charming little shops along McCrackin and we of course visited them.

Most all of the shops/buildings along McCrackin were used in the movie, including The Little Red Barn shop that was Ruth’s and Idgie’s place. We also stopped in another shop for some honey from the bee charmer. 😉

There are lots of unique things in all the different shops. Unfortunately, one of the things I fell in love with, this squirrel was not for sale.

It was a rainy December day when we were there, but there were still some beautiful colors all around. I snapped this picture outside the bank building from the movie, which is now a gift shop. The owner of the shop told us that this building had actually just been built solely for the movie and was just a shell. It wasn’t fully enclosed and made useable until it was turned into a gift shop.

After seeing everything we could in downtown Juliette, we drove just about five minutes up to a nearby church to see the graves of Buddy Threadgoode and Ruth Jamison.

The Bee Charmer had already left some honey. 😉

Jason reached in his pocket and found exactly three pennies and no more, which he deemed was a sign.

I concur. There are some things in life you just can’t argue with. We left the three pennies there on the graves and headed south for the rest of our adventure.

For reference, Juliette is about an hour south of Atlanta. While it was a stop for us on our way on down to Plains, it’s still a great little day trip from the Chattanooga area or of course from Atlanta.

Looking for more adventures in the South?

Things to Do In Nashville – a must-visit city of the south!

The Must Do’s in New Orleans – my personal favorite!

Things to Do in Chattanooga, Tennessee – a great spot for family vacations!

Join the Freak Show on: