You are here: Home >> Stories >> Don’t forget to tip your hat to Hank. 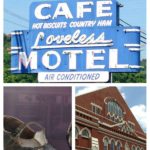 I remember being about four or five years old, in the kitchen with my Grannie one day, when we heard country music and line dancing start playing on TNN.

She swept me into her arms.

Carried me into the den.

And we did our own version of line dancing right then and there in front of that tv.

She knew the song.

She knew the steps.

And she held me as we danced.

And in those moments, my love affair with country music began.

From Loretta & Conway to Garth & Trisha, I love them all.

Furthermore, I firmly believe that every single situation in life has an accompanying country song and I’ll be happy to tell you what it is.

Grunt Labor and I decided to take a quick trip for our five year anniversary back in June. As we pondered our options, one city seemed to be clear – Nashville. 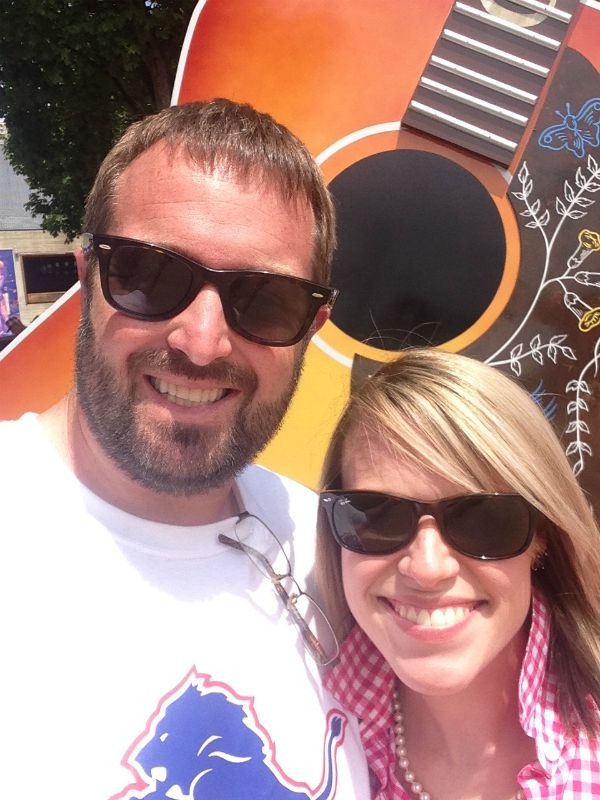 We only had a couple of days to spend in the city, so we opted to stay downtown on Broadway within easy walking distance to just about everything besides The Opry.

I’m sure there are hundreds of things that locals love to do in their great city, but these are always our favorite things to do in Nashville…

We didn’t get to see a performance at the Opry, but we did make it a point to stop by the sacred ground before heading into downtown. In other words, I insisted on going to the Opry gift shop to get an updated version of my Grand Ole Opry Member Book. The Opry is simply the heartbeat of country music. 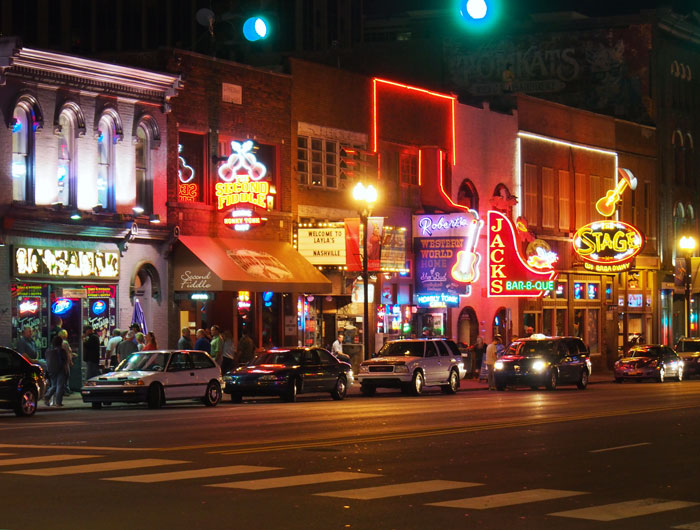 Broadway is like the epicenter of downtown Nashville. This is where Tootsie’s is, lots of honky tonks and other things you won’t want to miss. Put your phone down and take it all in. See how many different songs you hear being played at once.

Hit up the Paradise Park Trailer Resort for lunch. 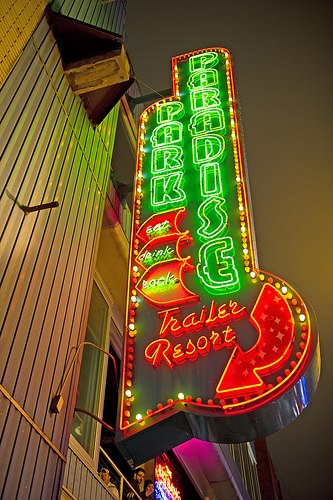 They make a mean BLT.

At some point, we usually hit up The Big Bang off Broadway where they have dueling pianos. It also happens to be where Grunt Labor first told me he loved me…but he was drunk so it didn’t count. 😉 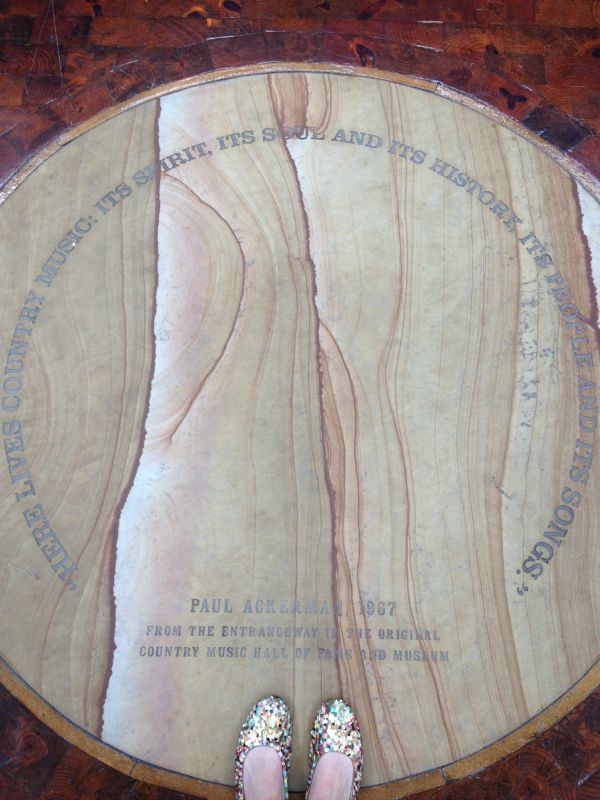 If you are a country music fan and have never been to The Country Music Hall of Fame, you must make it a point to go. This is not the same hall of fame from 15 years ago. They moved locations a while back and the new one is huge. Its filled to the brim with artists’ sacred outfits, guitars, even cars. 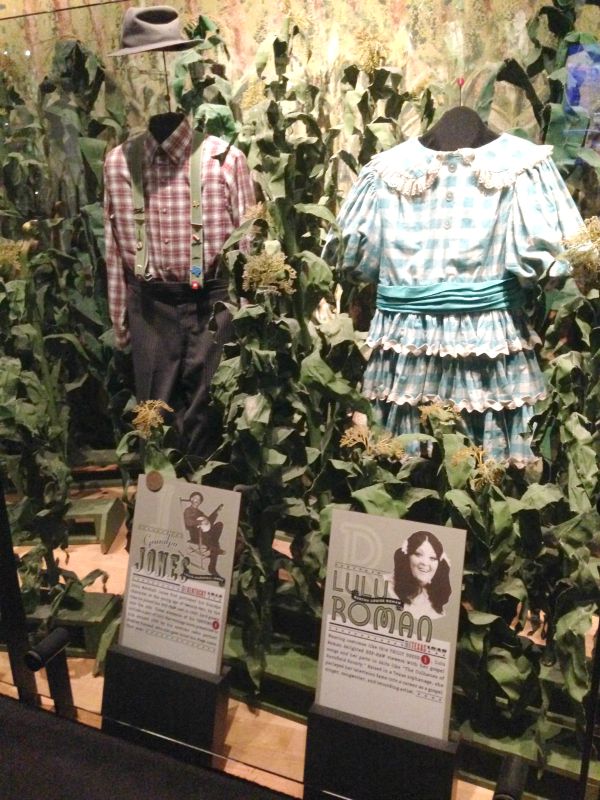 I loved the Hee Haw exhibit. 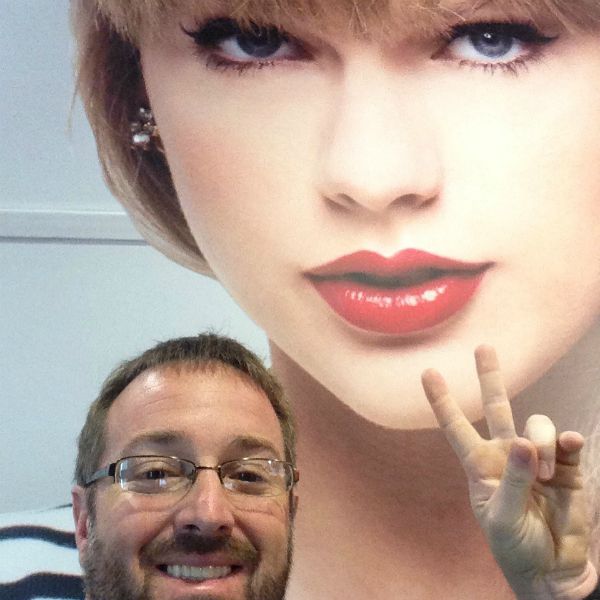 And Grunt took his picture with Taylor. 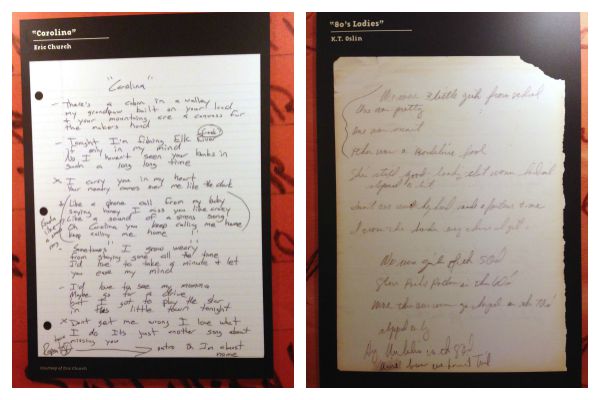 One of my favorite things were these, which were the handwritten original pieces of paper where Eric Church wrote Carolina and K.T. Oslin wrote 80’s Ladies.

I have to say though, I was a little disappointed with the lack of Conway Twitty items. I did take this quick picture of him and Loretta. 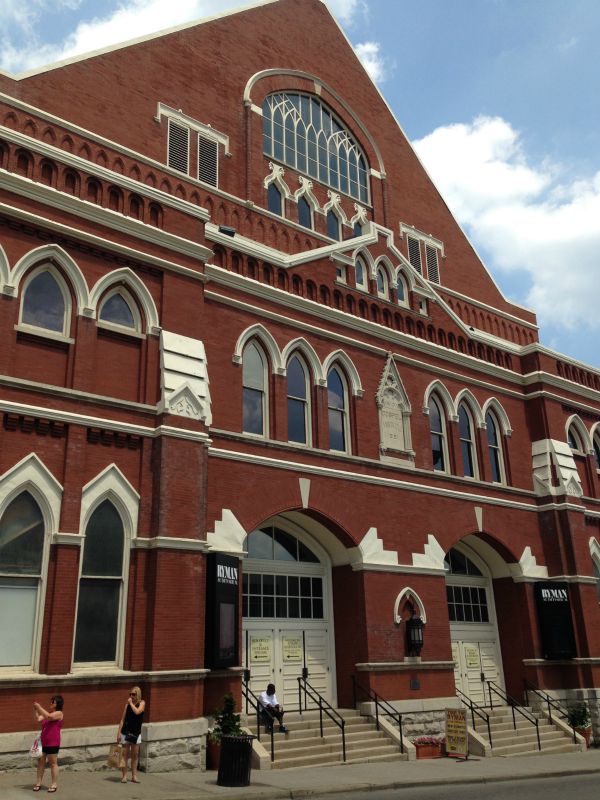 God bless the Ryman. The Mother Church of Country Music. The Ryman is where the Grand Ole Opry originally started broadcasting. Its where Minnie Pearl stood on the stage for countless years. 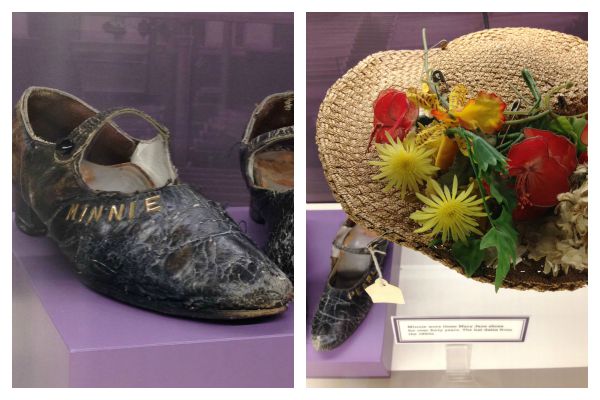 Don’t miss the display of her shoes and hat. Sit in a pew. Take it all in. If you listen closely, you’ll probably hear her announce, “Howdy! I’m just so proud to be here!” 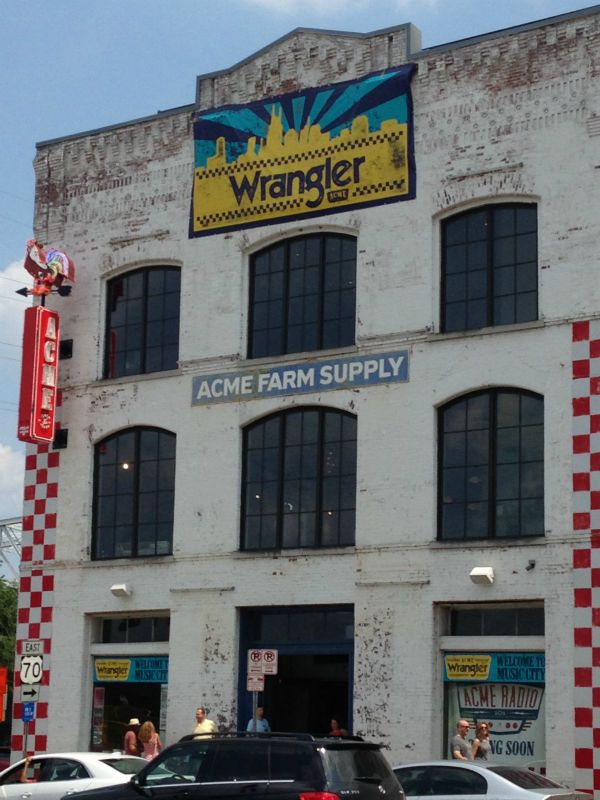 Acme Feed and Seed has been many things over the years including a feed store at one time. Now, it is home to a restaurant, gift shop, event space and a rooftop bar with amazing views of downtown and the river.

6. Head over to Merchants for dinner. 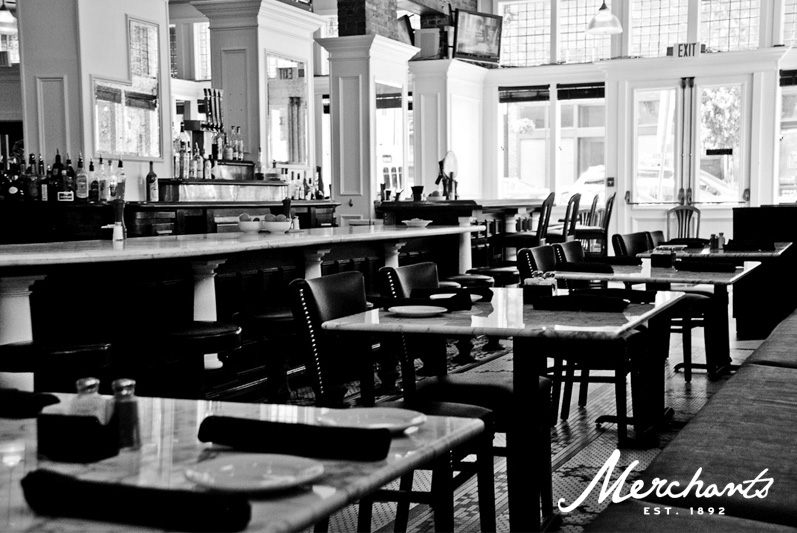 We opted to treat ourselves our last night in town at Merchants. Merchants was once a hotel where the one and only Dolly Parton, Patsy Cline and Hank Williams stayed among other country music royalty. The first floor is home to Merchants Bistro, but we opted for dinner on the second floor and just let me tell you, the steak was phenomenal. I had a whiskey with it and waved to Patsy in the booth across from us.

7. Go down a side street off Broadway and find good live music. 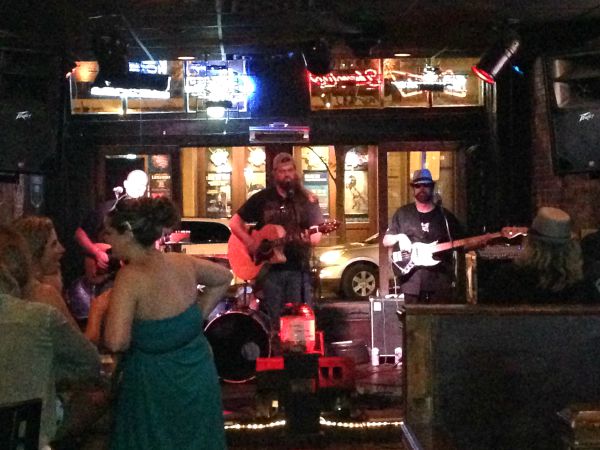 While Broadway is hopping with live music and most definitely a sight to behold, I find that the best music and the best bars are off Broadway on the side streets. We ended up at Benchmark.

The band played everything from George Strait to Eric Church and a little bit of 70’s rock. 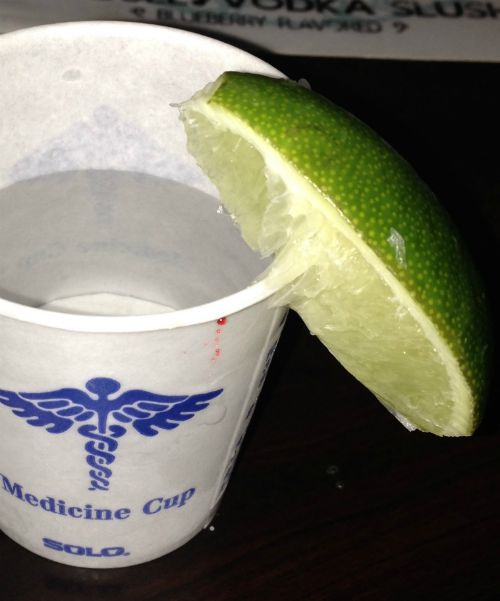 And shots were served in medicine cups. Brilliance.

8. Hit up Loveless Cafe for breakfast on your way out of town. 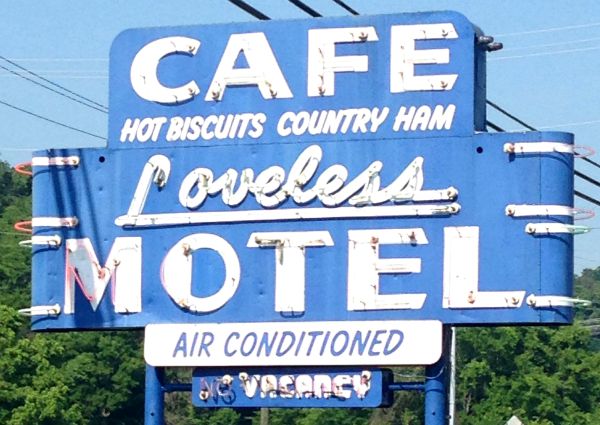 In the fifties, the Loveless’ started serving biscuits out of their front door. Eventually the little house became a full-blown restaurant and motel. The motel is no longer open, but Loveless Cafe still serves the best biscuits, and chicken and waffles according to Grunt Labor, for miles around.

The one thing that we really wanted to do, but just couldn’t was visit The Bluebird Cafe. Its definitely on the list for the next time around though…

And on the way out of town, be sure to tip your hat to Hank…

Do you have any favorite spots in Nashville?

Do tell so I can add them to my list for our next trip! 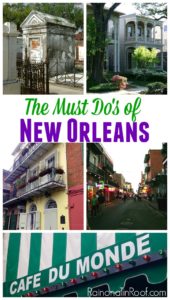 The Must Do’s of New Orleans

If you love the south and reading, you’re also going to want to see these…. 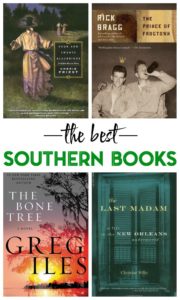 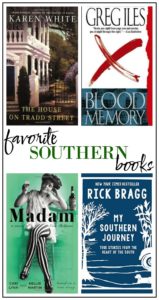 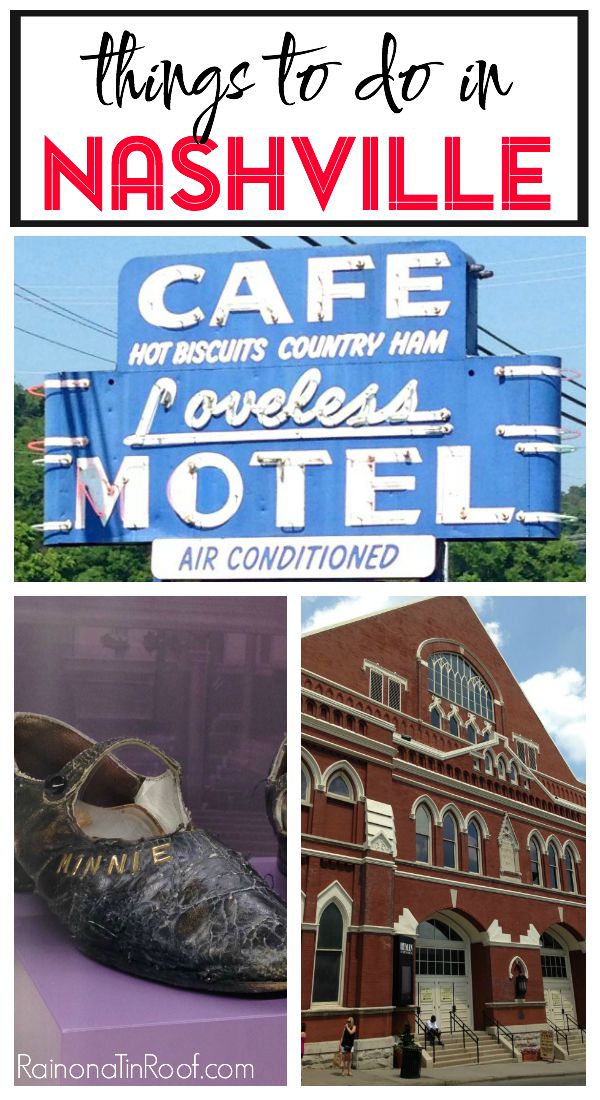